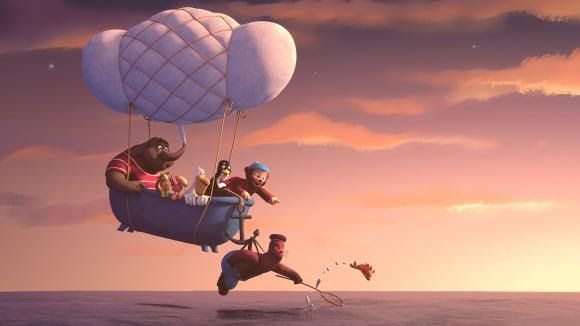 Rasmus Klump and his friends on an adventure around the world (photo: Egmont)
May 2nd, 2016 6:30 pm| by Lucie Rychla

A new animated TV series about bear cub Rasmus Klump and his friends has won a prestigious award prior to its official release.

Yesterday, the series received the Award for Best Animation Series at IFTS 2016 in Stuttgart, one of the world’s most prestigious animation festivals.

Based on the original stories, the Rasmus Klump TV series features 26 episodes, each of which are 12 minutes long.

High quality production
The series was produced by Lars Sylvest, who has been involved in the production of several Hollywood movies, and Carsten Bunte from the award-winning Studio Soi.

“Rasmus Klump is an established brand with many traditions, and now he is making a comeback,” said Michael Benzon, the head of licensing at Egmont Publishing Danmark.

“We are very proud of the new series and its high quality, which is essential for us when it comes to working with the Rasmus Klump brand.”

Almost 20 years have passed since Rasmus, Pingo, Skæg and Pelle last appeared in a TV series, but their adventures have grown in popularity nevertheless.

Popular in Japan
Although marketed mainly to pre-school children, when introduced to Japan in 2014, the Danish bear cub became an instant hit among women aged 20-40.

In Denmark, the Rasmus Klump app has been a great success with 600,000 downloads.

Rasmus Klump started as a cartoon in the Danish newspaper Berlingske Aftenavis in 1951, and a year later the first Rasmus Klump book was published.