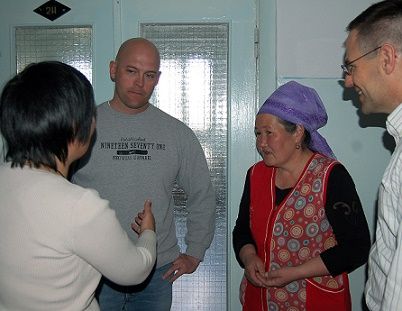 Some doctors fear that the new fee for interpreters will jeopardize patient safety for less affluent immigrants (photo: US Air Force/Tech Sgt Jerome Baysmore)
July 5th, 2018 9:42 am| by Stephen Gadd

If you have lived more than 3 years in Denmark and you still need an interpreter to explain a medical problem, from this week onwards you are going to have to pay the cost yourself.

More exactly, an interpreter sitting in on a GP visit will cost you 344 kroner and 1,675 kroner for a course of hospital treatment.

READ ALSO: Lost in translation: interpreters again in the spotlight over serious errors

You may, however, be able to seek an exemption from the fees if you are suffering from a condition such as post traumatic stress disorder that makes it difficult to learn Danish, reports DR Nyheder.

Lack of understanding could result in errors
A number of GPs are sceptical – especially those working in practices with a large proportion of immigrants. Lise Dyhr from Brøndby Strand is one of them.

“It is absolutely vital to have an interpreter because many of our diagnoses and courses of treatment are based on conversations. If we can’t be sure that we understand each other, then there is a substantial element of insecurity,” she told DR Nyheder.

Dyhr is afraid the fee will mean a lot of patients dispense with an interpreter; that happened last time a fee was introduced back in 2010. This was quickly dropped though, because it was found to be too complicated for the Regions to administer.

Supposedly an aid to integration
The new law, which was passed by the government together with Dansk Folkeparti and Socialdemokratiet, is one of the measures intended to integrate immigrants quicker and get them learning Danish.

It is also designed to save ca 2.4 million kroner from the annual amount of around 170 million the health service spends on interpreters, although these figures are somewhat speculative.

“For us, it is about good integration but also about fairness and reasonableness. We believe that when you’ve lived in Denmark more than 3 years and still need an interpreter when you have to go to the doctor, then you must pay for it yourself,” said health minister Ellen Trane Nørby.

The law has come under attack from a number of quarters including the patient organisation Danske Patienter, the doctor’s organisation Lægeforeningen, the nursing federation Sygeplejerådet and the Regions themselves. Apart from the extra administrative burden, it is argued the measure will have serious consequences for poorly-educated patients as well as impacting patient safety.

Pressure on children
There is also the fear that the charge will result in more patients bringing their children along as interpreters – even though that is illegal.

A DR survey amongst doctors in areas with a lot of immigrants shows that this is already happening. Out of 19 doctors, 10 said that they have had consultations over the last year where children under 15 had been used as interpreters.

This does not sway the minister, who condemns the use of children as interpreters but still thinks the fee is a good idea.

“This law gives you three years to learn Danish. After that, if you don’t want to pay the fee, you will have to find a friend who speaks Danish well enough to interpret for you,” said Nørby.