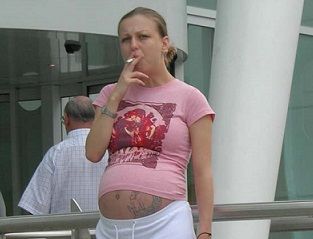 This is definitely bad but all nicotine products should be avoided by mothers-to-be (photo: Gideon)
March 22nd, 2019 11:39 am| by Stephen Gadd

It has long been accepted wisdom that pregnant women shouldn’t be smoking, at least not whilst they are pregnant.

With this in mind, Odense municipality recently proposed a scheme to give pregnant women a gift-card for 1,000 kroner if they gave up and joined a ‘stop smoking’ course.

However, as a consequence of the results of an as-yet-unpublished study, researchers from the Department of Drug Design and Pharmacology at the University of Copenhagen have discovered that this is not enough.

READ ALSO: One in nine Danish women smoke during pregnancy

Lessened blood flow
“When a pregnant woman uses nicotine chewing-gum or any other form of nicotine substitute in connection with stopping smoking, she risks damaging her foetus as much as if she’d continued to smoke,” associate professor and brain researcher Jesper Tobias Andreasen, told BT tabloid.

The negative effects are caused by nicotine reducing the flow of blood through the placenta leading to the foetus not receiving enough oxygen to the brain. This can cause conditions such as ADHD, anxiety, depression and addictive tendencies later in life.

Cold turkey is best
Andreasen points out that a ‘stop smoking’ course is all very well but the only safe way to do it is to go ‘cold turkey’ – without any form of nicotine substitutes.

Vaping is also risky if you are pregnant because the levels of nicotine in the liquids used can contain very variable amounts and often more than normal cigarettes.

Up to now, for ethical reasons regarding potential damage to foetuses, the Copenhagen research has only been carried out on mice.

However, “we know from extensive studies that people who have been exposed to nicotine in the womb show a higher propensity to ADHD, anxiety, depression and drug abuse,” said Andreasen.

The researchers intend to publish their findings in a scientific journal within the next couple of months.