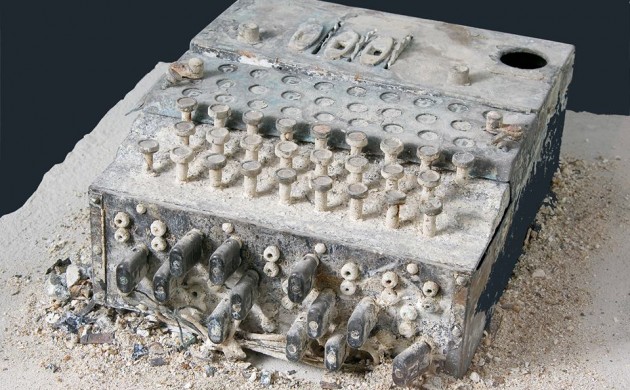 The Post og Tele Museum in Copenhagen has discovered that a rough-looking machine that it has been in possession of since the turn of the century is actually the world’s oldest existing marine Enigma machine.

Of the 611 M1 Enigma electro-mechanical rotor cipher machines produced for the Germany navy in 1934, only three remain. The one at the Post og Tele Museum has the serial number ‘M522’, which is the lowest of the three and thus makes it the oldest.

“It’s proven to be unique and extremely rare,” Andreas Marklund a researcher at the museum, told DR Nyheder.

“We got it x-rayed and experts from around the world looked at it. We found the serial number, which was well hidden due to the machine’s poor condition, and we could then observe it had a lower number than the other two machines.”

Critical for Allies
The first Enigma, an electro-mechanical rotor cipher machine, was produced for the German army already in 1926, and the machines would eventually go on to play a critical role for the Germans in World War II.

The cipher machine was essential to the German military, particularly in its quest to rule the Atlantic Ocean with its submarine wolf-packs, which harassed the Allied efforts at every turn.

But thanks to British cryptologists being able to decrypt a huge number of messages enciphered on the Enigma, the Allies were able to use the German codes to gain a massive advantage in the war.

“It’s important that we, as is the case here, continuously gain more information about the history of the Enigma because it was a key part of WWII,” David Hamer, one of the world’s most respected experts in cryptology history, told DR Nyheder.

“When the codes were broken, the Allies got a direct insight into the most important German communications. It’s a fascinating story.”