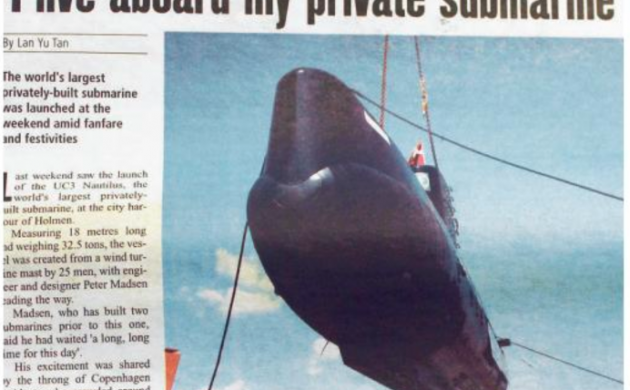 The Peter Madsen trial – rather like with WWII, it must have got to the point when journalists don’t have to keep on reminding the reader of the details of when, where and who in the first sentence – entered even murkier waters today. The why and the how remain unclear.

The Australian maker of a documentary film about the submariner/rocket man, who was filming the suspect on the day of the alleged murder, took the stand today and his testimony will feel to many like the end of ‘The Usual Suspects’.

Madsen was a man of low energy, the court was told, and the suspect referred on camera to himself as the “main suspect in the murder of his neighbour’s wife, adding that he had the right not to comment, and all he could say could be used against him”.

“I may be a bit psychopathic”
This latest revelation will surprise few of the keen followers of the trial of the Dane accused of killing Swedish journalist Kim Wall on August 10 last year.

In the same interview – which took place nonstop between 12:06 and 14:12 on August 10 and finally concluded, with breaks, on 16:30 –  Madsen confessed he may be psychopathic.

“You are all alone in the most important moments of life,” he said on camera. “When you are born and when you die.”

“It seemed like a deep thing to say right there,” said the witness.

Loving testimonies
In total, eight witnesses took to the stand on Monday – some for the prosecution, others for the defence, and most of them former lovers of the accused.

One witness met Madsen in 2008 through a S&M club. She testified that Madsen never tied her up during sex, and that she once choked the defendant – but not to a point of unconsciousness. The witness suggested Madsen was not particularly turned on by being dominated.

Another witness concurred that Madsen did not appear to be turned on when asked to dominate – and that he was also unadventurous.

Another witness revealed how Madsen was repulsed when he heard tales of women being physically hurt and was empathetic when she showed him signs she had been hurt by other men.

Another witness revealed that in 2008 he came across a video of someone’s throat being cut. The same witness also testified to uncomfortable meetings with Madsen.

And another witness confessed to Madsen showing him a choking video in 2004.

When the pressure was low
Several of the defence’s witnesses referred to cabin pressure problems, which Madsen claims were responsible for Wall’s death.

One was aboard the submarine in June 2017, and the witness told the court how Madsen told her: “I almost killed you.”

Finally, a witness from the Danish Maritime Authority delivered more damning testimony that Madsen’s actions on August 10 had endangered the lives of other seafarers.