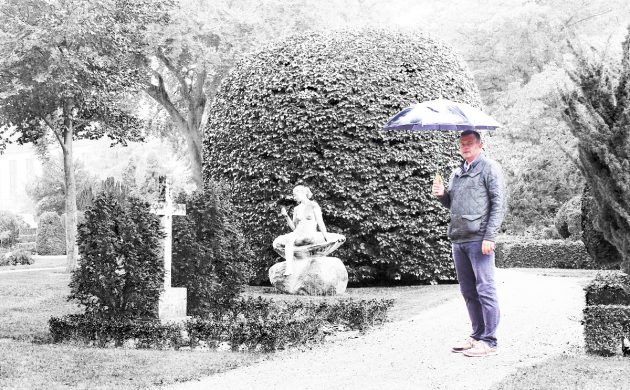 For Juri Christensen, there are two types of people in the world: the living and the dead. And he talks to both.

If you were to pass Christensen on the street, you wouldn’t suspect that he moonlighted as a paranormal investigator. Christensen fits the model of the Danish working professional: a trim haircut, a healthy summer’s tan, the understated earth tones native to Danish attire. Put shortly, he looks normal – he just happens to speak with the dead.

“To me it is normal to talk to ghosts, higher beings and nature. That might not be what other people do, but to me it is just as ordinary as being good at the cello, even though that too is a specialised skill,” Christensen said.

For him, busting ghosts is just another part of normalcy. In fact, he winces at descriptors like ‘paranormal’ or ‘supernatural’ when discussing his work.

“The word paranormal insinuates that there are two sides: a normal and a not-normal,” he said.

“That’s why I can’t call it para or super anything. To me it’s all normal, just different shades of normal.”

Part-time poltergeists
By day, Christensen works in IT. By night, he busts ghosts. Based in Roskilde, he sees between 15 and 20 clients every year, extending his services across the island of Zealand. Having worked ten years in this fringe field, estranged from scientific corroboration and so often refracted through the lens of Hollywood, Christensen paints a picture of the paranormal far different from popular impressions. In a world steeped in subjectivity, Christensen asserts one thing for certain: ghosts are very real.

Ghosts occur, explains Christensen, when the spirit of the deceased gets stuck somewhere between death and the afterlife. They remain in our physical world, though limited in their substance and expression. For Christensen’s clients, a ghost’s presence can bring unease, negative energy or daily discomfort. His job is to help these lingering spectres complete their journey to the afterlife – which starts with figuring out why they’re stuck.

“We have to find the root cause of why they’re still here,” Christensen said.

“The most common thing I see with dead people I help along is that they have a big attachment to the place they lived and are untrusting of the next generation to take care of the place as well as they did. Other cases could involve the deceased having unfinished business, like living children they want to take care of, or strong arguments or dislikes they either want to settle or continue with.”

Defining a phantasm
Christensen characterises ghosts as individuals with a full consciousness and free will, lingering in this worldly dimension in an otherworldly form.

“For me, ghosts have a human form, intelligence, humour and personality, just without a physical body,” contended Christensen. He rejects the notion of ghosts as unfriendly presences, estimating that nine out of every ten ghosts he encounters are benevolent and quite reserved. He says that classic symptoms of a vicious haunting, such as flickering lights and shattering saucers, are more often than not just the ghost’s way of calling for attention. Christensen responds to these paranormal symptoms with compassion – for him, the work is as much about helping the ghost as it is about helping the client.

Most jobs are a simple matter of convincing the spirit to release its earthly bonds. Sometimes, this requires action in the physical world, such as moving or securing cherished possessions.

Other times, it’s as easy as verbal persuasion – after which, Christensen says, he witnesses the ghost ascending to the afterlife. This ascension is a greatly rewarding event, and one of tremendous emotion – depicted with surprising accuracy, according to Christensen, in the final scene of the 1990 film ‘Ghost’.

The art of ghost busting
Christensen insists that engaging in this world, which might seem fantastical to the unaccustomed, is simply a matter of training. He rejects any murmur of gift or instinct.

“It’s built much more on being sensitive to signals that might go unnoticed by people who don’t work in the area,” Christensen said.

“People call it a gift. To me, that makes it all special, and makes me special – for me it’s nothing special at all, it’s just a hobby that I like.”

Christensen’s own training began with martial arts, which introduced him to exercises in meditation and energy flow, commonly known as ‘qi’.

Further pursuit of these concepts led him to reiki healing, a Japanese alternative medicine. Reiki, often a pseudoscience punching bag for clinical researchers, has thousands of followers worldwide. For Christensen, reiki’s emphasis on personal and environmental energies served as a natural transition to the spiritual world, where the presence of a ghost is often detected by disturbances in these energy fields.

“Healing is sort of the bridge between the unphysical and the physical,” Christensen said.

Indifferent to the empirical
Frequently debunked or dismissed by conventional scientists, both reiki and ghost busting are built on a foundation of subjectivity. Without the framework of verifiable evidence, appealing to sceptics and agreeing with colleagues can be challenging.

“Even in the physical world people debate how to measure this and that and so on. They do that also in the alternative world, and it’s perhaps easier to have different viewpoints because it’s more difficult to use hard science,” said Christensen.

Truth, then, can be hard to come by. Christensen often finds it through co-operation with fellow ghost busters, who corroborate visions of specific apparitions or energies.

Equally important, says Christensen, is trust: faith in his own training, and confidence in the signals he detects. Though in this line of work, getting caught up in the pursuit of objectivity isn’t always helpful. What matters most, Christensen says, is the results.

“Whether there is the actual presence of a ghost or just the belief that there is a ghost, it’s still a problem for the people seeking help,” explained Christensen.

“I can see that the services I provide do the job, and that the client is satisfied that the issue has disappeared. That’s enough for me.”

Within this nebulous trade, Christensen finds stability in normalcy. Approaching ghost busting as a trained skill helps remove its shroud of mystery, dissolving the fear and apprehension so often tied to ghosts.

Christensen’s trust in his own methods allows him to work in comfortable indifference to criticism, though his cheerful jokes regarding his own sanity suggest he’s fielded his share of naysayers. In response to the doubtful, Christensen advocates an open mind, along with the willingness to accept and detect what might be lying in plain sight.

“Strain your imagination and your senses like you’re trying to hear something distant,” suggested Christensen.

“No matter how silly the possibility of fantasy is, go with it. Suddenly, it just becomes normal.”