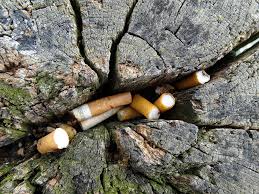 They do their best to work their way into every nook and cranny of nature (photo: pxhere.com)
September 20th, 2018 8:36 am| by Ben Hamilton

Last Saturday was World Cleanup Day as 13 million people in 155 countries gathered to collect as much rubbish from nature as possible, and Denmark was no exception.

Cleanup days aren’t new in Denmark, and every year International Coastal Cleanup assesses what is the biggest culprit in Denmark.

Will it, for example, be those pesky laughing gas cylinders that are turning up everywhere, or maybe the plastic film that covers a cigarette packet and is so often discarded onto the street?

No, although the winner was related to the latter. For the 32nd year, the cigarette butt emerged victorious.

And now various organisations have had enough.

Tax the filters!
Cancer society Kræftens Bekæmpelse would like to see the filters banned. An estimated 2-3 billion butts end up in Danish nature every year, it claims.

The butts are made of fibres containing a plastic called cellulose acetate, which takes a long time to break down naturally.

Kræftens Bekæmpelse argued to DR that the filters don’t really stop people getting cancer and other diseases – giving smokers a “false sense of security”.

One solution it suggests is a tax on the filter – a suggestion opposed by the Dansk Erhverv business interest group, which said more should be done to encourage consumers to change their behaviour.

More rubbish bins especially tailored to collecting butts would be a good start, it argued.