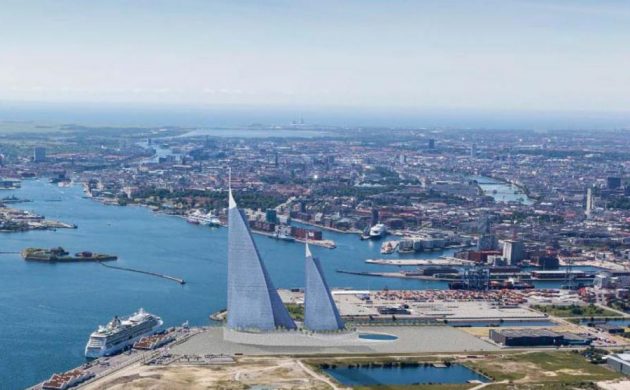 Architecture firm BIG, with Bjarke Ingels at its head, has submitted plans for a 280 metre tower and theme park for land overlooking Copenhagen Harbour.

If approved, the HC Andersen Adventure Tower would be situated on a site at the tip of Nordhavn on Oceankaj.

Enter a new challenger
However, before the municipality’s planning committee has had a chance to properly consider the plans, a competing consortium has come up with a proposal for an even higher building for the same site.

Entitled Great Northern, this would comprise two sail-shaped skyscrapers of 330 and 190 metres respectively on a communal base, resembling a giant two-masted sailing ship, Magasinet KBH reports.

A metro station would be incorporated into the base, with parking facilities and a shopping centre. The ‘sails’ would contain a mixture of flats, offices and a hotel.

All in all, the building would fill 283,000 square metres, which is more than double that of the HC Andersen tower project.

Many potential stumbling blocks
As yet, the municipality has not revealed the identity of the group behind the Great Northern project.

However, both projects first have to go through the planning process and both infringe all the planning regulations laid down by the municipality for the future development of this part of the city.

Outer Nordhavn is an area that can only be built on in 2027 at the earliest. The master-plan for the area is for lower buildings the closer they get to the Sound. Also, the most optimistic prognosis for the Metro to be extended out that far is 2030.

Affordable housing top priority for mayor
As well as interfering with the sight line through Frederiksstaden seen from Amalienborg Castle, for safety reasons local politicians have set a maximum height for buildings in Nordhavn of 280 metres because of incoming flights to Copenhagen Airport.

And there’s another issue. Morten Kabell, the deputy mayor for technical and environmental issues, pointed out to Berlingske that the project will make Nordhavn an even more exclusive and expensive district and that Copenhagen does not need more ghettos for the rich. He would like to see more affordable housing being built.