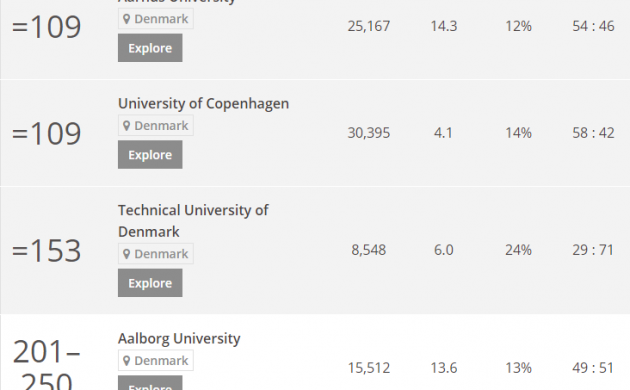 The University of Copenhagen (KU) and the Technical University of Denmark (DTU) both took considerable leaps up this year’s Times Higher Education World University Rankings.

KU jumped 11 spots compared to last year’s ranking to 109th in the world, while DTU hopped 23 places to 153rd. Meanwhile Aarhus University fell from 98th to 109th, while Aalborg University and the University of Southern Denmark remained in the 201-250 bracket.

Bavarian Nordic takes hit
The Danish pharmaceutical company Bavarian Nordic took a big hit today after its share value more than halved following news that one of its cancer research projects had been halted. Bavarian Nordic shares fell by 58 percent (roughly 6.5 billion kroner in worth) this morning following revelations that the third phase of the medication Prostvac – used in the treatment of prostate cancer – had been stopped prematurely due to inconclusive data results.

Researching the stars
Three researches from the Department of Astrophysics & Planetary Science at the Niels Bohr Institute have used comprehensive computer simulations to conclude that the current model used to describe the formation of stars is rather basic. The researchers looked into the formation of nine stars in different areas in space and found that star formation is significantly influenced by local conditions in space – which can strongly impact the speed of the formation process. The research has just been published in the scientific journal, the Astrophysical Journal.

Going back to Cali
The food and environment minister, Esben Lunde Larsen, will be in the US next week to promote Danish technology pertaining to water, food waste and the environment. Danish water tech could very well help drought-ridden California and Larsen will sign an agreement with the governor of California, Jerry Brown, regarding aiding the state’s future water supply issue. Larsen will also meet with the US Department of Agriculture and the World Bank, as well as leaders from a number of US food giants – such as Campbell Soup, Tesco, Unilever, Rockefeller Foundation and Kellogg’s.