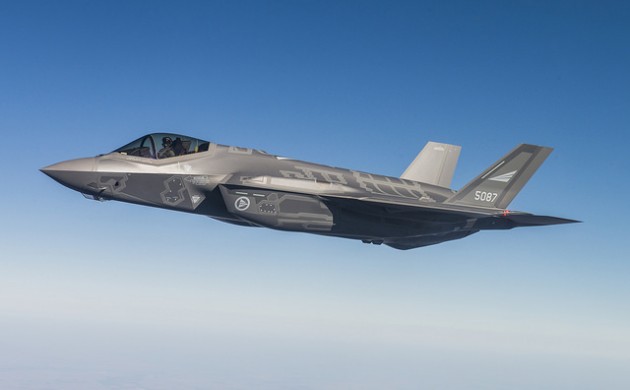 Different sources would appear to disagree on the number of jets (photo: Norwegian Ministry of Defense)
November 25th, 2019 7:34 pm| by Thess Mostoles

As the budget for the construction of the F35 hangar continues to rise, now reaching 1.1 billion kroner, the US ambassador to Denmark has encouraged Denmark to buy more F-35 fighter jets.

Denmark has bought 27 F-35 fighter planes from the US, but at least five of those will remain in Arizona, where the Danish pilots are been trained.

Ambassador Carla Sands is concerned that NATO’s aircraft power and surveillance capacities are not enough in the Arctic and that Denmark should fulfill three-year-old promises to strengthen defence and surveillance there.

Ambassador Sands referred to a report from the Ministry of Defence on the tasks in the Arctic from 2016, which show concern about the presence of Russian soldiers in the Arctic. Sands also believes the report shows that the lack of satellites means that Denmark does not monitor Greenland’s skies or waters well enough.

“There are not a lot of aircraft in Denmark. You have 38-40 F-16 aircraft today. It is actually a reduction in the number of aircraft, and Denmark should probably look into it,” Sands told Jyllands-Posten. However, according to the Ministry of Defence, Denmark only owns 30 F-16 planes

An unreachable promise to NATO

The ambassador’s remarks come a few days before the next NATO summit. On December 3 and 4, the NATO Heads of State and Government will meet in London, and it is expected that the US will carry on pushing the other countries to fulfill the 2 percent promise, as it has already demanded a plan to raise the budget from each NATO country.

At the Wales NATO summit of 2014, NATO countries vowed to keep defence spending to at least 2 percent of their GDP. As of 2018, only six members have achieved it: the US, Greece, the UK, Poland, Latvia, and Lithuania. Denmark spends 1.35 percent and plans to raise it to 1.5 by 2023.

“This is the conversation we are having with our NATO partners. We have all committed to try and meet the 2 percent target. I have been here three months, and I am struck by the remarkable strong partnership we have – both bilaterally with Denmark on security issues and also the conversation within NATO,” Stuart Dwyer, US vice ambassador, told TV2.
While Dpnald Trump is not the first US President to demand NATO countries to increase their budgets, his policy style makes it unclear what the consequences will be if NATO countries do not comply.
However, the minister of defence, Trine Bramsen, told Jyllands-Posten there are no plans to buy more fighter aircraft right now. Nor should Trump expect Denmark to present a plan for an increased defence budget at the London summit.