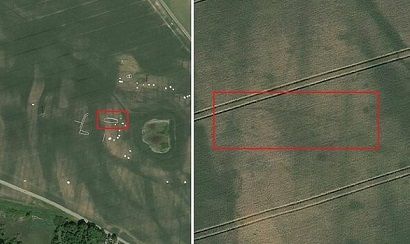 The differences in colour can point the way to man-made constructions (photo: Google Earth/Museum Vestsjælland)
March 14th, 2019 11:26 am| by Stephen Gadd

For some time now archaeologists have used aerial photographs to pinpoint signs of settlements and ancient field systems. Recently, satellite technology has been able to provide an added dimension.

A range of dates
Although some of the located items are a lot older, the long house can be dated to the Viking era because of its typical design.

“We’re incredibly thrilled by the find,” the head of the museum, Michael Vennersdorf, told TV2 Nyheder.

Signs of settlements can be identified due to colour changes in the fields that are visible from the air. The wood used for walls and supporting posts has stayed in the ground and rotted, so looks dark compared to the surrounding area.

You can’t hide
“Even though things have rotted away we can still see traces in one way or another. You could say that it is actually very difficult to conceal anything from us,” explained Vennersdorf.

The record summer last year has been a major contributing factor to the discovery as it has emphasised the difference in colour between the dry crops and the damper, fertile patches.

There are as yet no plans to excavate on the site, and the precise location is being kept secret to deter amateur treasure hunters.