 Economics Explained: Step back from the curve! - The Post

The yield curve shows the interest rates of bonds with different maturity.
But let’s take one step back. A bond is a loan made by a lender to a borrower. The bond has a fixed face value that the lender will get back at maturity.

Usually the interest rate is higher the longer the maturity. The intuition is that lending your money for a longer period is more risky, since more things can happen during that period, and so you are rewarded with a higher interest.
Consequently, the normal yield curve is upward-sloping.

The interest rates on the bonds that form the yield curve are determined by the market and the level of demand for them, so they reflect the expectations on the future level of interest rates.

Consequently, the shape of the yield curve provides indications of where the economy is heading and can be relevant, for example, for house owners paying a mortgage.

An inverted yield curve usually indicates economic recession. When investors expect interest rates to decrease in the future, they prefer to lock their savings in long-term bonds before the yields decrease further. Increasing the demand for long-term bonds decreases their interest compared to short-term bonds – resulting in a downward sloping yield curve.

The yield curve has been inverted in the last year and has now turned to normal again. According to some investors this is an indicator of a recession on the way, following the trend of recent history that recessions follow inverted yield curves. 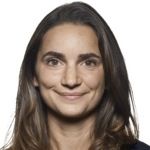 Martina Facino works for a leading consultancy firm where she specialises in competition economics and maintains a strong interest in macroeconomics. Using her master’s in economics and finance, she intends to focus on explaining macroeconomic concepts and describing them in the current context.