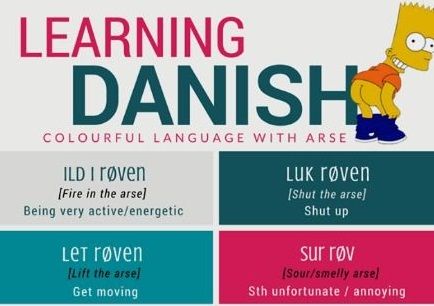 This December my son turns two. I’ve been living here for just over two years. We share an equal grasp of the Danish language. That is to say: not very much.

Empire long gone
I feel guilty that I gave up lessons after only a couple of months. I couldn’t make the lessons work around other commitments, so I had to drop out. Then life got in the way and I’ve yet to return.

But I really wanted to learn Danish. It’s only proper to speak the language of the country in which you are living. Gone are the days when the British marched all over the globe bellowing at terrified natives to buck up and speak English like civilized human beings.

I get that. The Empire is long gone. I live in Denmark and I should speak Danish. Thing is, it’s so bloody hard.

Parlez-vous Danglish?
Before I started Danish lessons, I thought I’d nail it. How hard can it be? I was good at languages at school. I was strong at French and German, passable at Spanish and dabbled in Latin (it was one of those schools). Should be a doddle, I thought.

More fool me. Letters, sometimes entire words, are swallowed up in pronunciation. There are no rules. No patterns. And here’s the kicker. When you try to speak Danish, the Danes don’t help you find your confidence. At all.

You pronounce a word *slightly* wrong and they look at you like you’ve just mumbled provincial Klingon. Too many times I’ve bravely attempted to utter a Danish word, only to be met with a blank stare and an abrupt ‘what’. They then correct me by repeating the word back and it sounds EXACTLY THE SAME AS WHAT I JUST SAID.

Come on, you knew what I meant. I’m making an effort here. Meet me half-way. But it’s not their fault. I have a theory about why this happens. I have no data, evidence or facts to back up this theory, but that seems to be the norm these days, so hear me out.

The science part
Native English speakers are used to hearing their language spoken in hundreds of different dialects. It has taught our brain to be adaptable and intuitive. We don’t even know we’re doing it, but no matter how impenetrable the accent, we fill in the gaps and make those mental leaps to understand.

However, because nowhere else on the planet speaks Danish (apart from seven horses on Faroes and a seal in Greenland), Danes just aren’t used to hearing their language spoken in an accent other than their own. They haven’t needed to tune their ear in the same way.

This could perhaps explain why many attempts to pronounce a Danish word fall on deaf ears. It doesn’t help, of course, that everyone here in Copenhagen speaks brilliant English. Maybe I shouldn’t continue to beat myself up. I’ll get there.

Bilingual by halves
Still, I am excited at the thought of our boy being bilingual. It really is a gift. At nursery they only speak Danish. At home he gets equal doses of Danish and English.

I watch him with a mix of pride and awe as he pieces together two distinct languages. It makes me want to head back to class. After all, it really is in my interest to understand Danish. In a few years, whenever I hear my son and his mum talking to each other in Danish, chances are it will be about me.