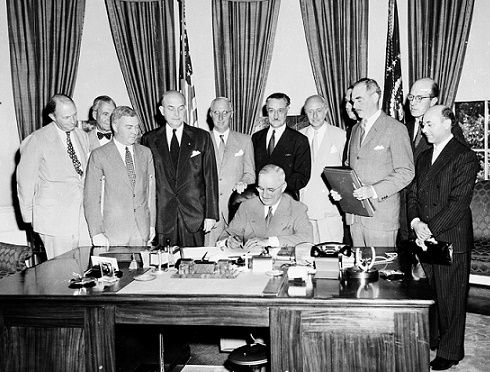 There are few diplomats in the annals of Danish history who can claim to have created quite the stir that Henrik Kauffmann did.

Branded everything from hero to traitor, Denmark’s representative to the US during WWII has elicited much controversy over the years.

But one thing certainly can’t be contested. He won’t be forgotten any time soon.

German roots
Born in Frankfurt in 1888, Kauffmann was named after his German grandfather Heinrich Kauffmann, who had served with distinction in the Danish army during the wars in 1848 and 1864.

In 1902, when Henrik was 14, the family moved to Denmark, where the family still enjoyed strong connections to the Danish Royal Family and where the Kauffmann name held significant sway. Henrik became a naturalised Dane at the age of 21 in 1909.

Henrik studied law at the University of Copenhagen – and also made longer study jaunts to Oxford and Geneva – before becoming a volunteer at the Foreign Ministry in 1911. After that, his career really took off, and over the next decade he enjoyed a number of promotions, including his first significant position as consulate secretary in New York in 1913.

After that he found himself in a number of positions as an envoy in Rome, Peking and Oslo, where he played a considerable role in resolving Denmark’s conflict with Norway regarding the sovereignty of an uninhabited part of east Greenland between 1931 and 33. He was also a strong promoter of Nordic co-operation.

Hero or traitor?
But really, Kauffman may have ended up as just a footnote in history had he not been posted to Washington DC in the summer of 1939 as WWII loomed on the horizon.

The very day after Denmark was occupied by Germany on 9 April 1940, Kauffmann became the first Danish envoy to declare that we couldn’t receive and act on orders from an occupied Danish government. Despite this, the US government still recognised him as Denmark’s official representative.

Greenland drama
After this things proceeded smoothly until 11 April 1941, when Kauffmann informed the government that he had entered into an agreement with the US concerning the establishment of US military bases on strategically-important Greenland.

The government in Denmark was shocked by Kauffmann’s move as it was not only considered it a major overstepping of authority, but also put the Danish government at odds with its German occupiers, which also found Greenland to be of strategic importance.

Scavenius considered the agreement to be void and the government wrote to Kauffmann on April 16 recalling him from the US. Kauffmann once again refused to return home, despite the government initialising an investigation against him and seizing his property.

In a message to Cordell Hull, the US Secretary of State at the time, Kauffmann wrote: “Under the circumstances, there was, to me, no doubt but that I must, in the interests of Denmark and Greenland, take this unusual step. The government in Denmark will not, as long as Denmark is occupied, be able to obtain full information as to the background and necessity for this action.”

Role in UN founding
Kauffmann continued to work for Denmark’s interests in the US, and in 1942 he joined the Allied governments’ declaration regarding the establishment of the UN.

Upon Denmark’s liberation on 5 May 1945, Kauffmann was appointed minister without portfolio and officially recognised as the envoy to the US again. He was a Danish delegate at the conference in San Francisco that year regarding the founding of the UN. Eventually he was named full ambassador to the US in 1947.

Before retiring in 1958, Kauffmann managed to negotiate compensation for Danish shipping companies from the US for using Danish ships during the war.

‘Till death us do part
As was the case with many of his deeds over the course of his life, even Kauffmann’s death could not avoid drama and notoriety.

In June 1963, a 74-year-old Kauffmann was suffering from terminal prostate cancer and was staying at Skodsborg Sanatorium – known today as Skodsborg Spa Hotel – when his American wife Charlotte slit his throat with a bread knife in what the police described as a ‘mercy killing’, before taking her own life with the same knife.

The legendary diplomat is buried at Vedbæk Cemetery, located just north of Copenhagen.