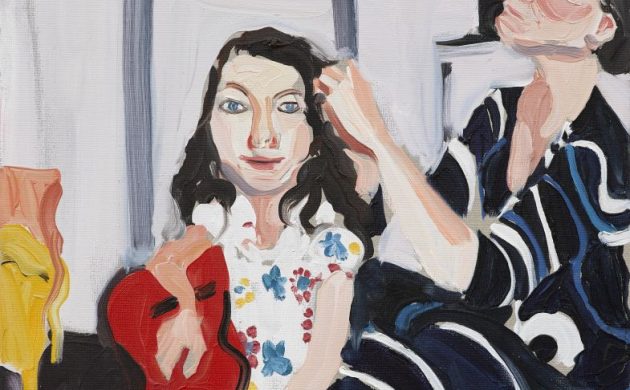 “Fearless warrior woman. War survivor. Grateful for the simple things. Embarrassed me as a child; makes me proud as an adult. A true original.”

Somehow, I’m the one producing the art for Louisiana’s latest exhibition, ‘Mor!’, a homage to motherhood co-curated by Marie Laurberg and Kirsten Degel, which has been taking pride of place in the famous museum’s West Wing since it reopened late last month, where it will continue until August 29.

Upon entry, all visitors are entreated to write something about their mothers (Mor in case you’re a linguistic disaster zone), and I’m no procrastinator. The above is all spontaneity.

“My pseudo-Viking mother keeps on dropping hints about being cremated on a boat – if the witchfinder generals were right about them being made of wood, she should go up a treat,” I wrote in 2013.

“I’m glad they stopped burning witches in northern Europe, as being the youngest, there’s a good chance I would have never been born. But then again, maybe I’m being unfair to my mother – with her talents for passing the blame, she probably would have evaded capture for years,” I remarked in 2008.

But if this all sounds too Hamilton-centric, that’s the point: ‘Mor’ is a deeply personal exhibition that we can all relate to. So duck out of the writing task at the entrance and you’re cheating yourself of true fulfilment at this exhibition. It’s important you get in the zone.

Destiny’s crowd?
I know what my mother would say about the opening image to greet us: “Beyonce who? Oh, an American. How ghastly!” There were no caesarean opt-out clauses when she gave birth to my goliath brothers (I’m the runt of the family) back in the 1960s – Beyonce Knowles can take her Christmas tree imitation and … she doesn’t know she’s (or they’ve) been born.

But after that abomination – an ill-advised attempt to contemporise and connect with reference-famished visitors who are just here to take a photo of the beautiful statue park and share on Instagram – I’m confident Mrs H would start to perk up.

There are some belting exhibits to behold: from photos hiding delicious details that can be easily missed, to provocation that digs into your ‘all is well with life’ demeanour and forces you to take a good hard look at yourself. It’s personal … do you get it now?

Knee-deep in memories
One of my early memories was hiding behind my mother’s knees from my brother. Creep up behind sofa, attack with vicious intent, run away and hide like a coward, and repeat – sometimes with a posse of friends. One day though, I knew, I would have to leave the warmth behind those knees forever.

But it’s there I am taken back when confronted with Kaari Upson’s stunning sculpture ‘Mother’s Legs’. Scores of spindly limbs hang from the ceiling, some ostensibly trunks of trees, others weary and varicose-veined – a reminder of how so much rests on one person’s legs.

Laure Prouvost’s ‘Mootherr’, especially carved for the exhibition and presented in a dedicated room, is another standout sculpture I won’t forget in a hurry. Nightmarish, womb-like and ethereal, this isn’t just my mother, but all mothers: enough teats for us everyone, but mind the messy floor. Who said motherhood was easy.

Stuffed down Tracy’s duvet
It can get harder too. Suddenly I spare a thought for my widowed ma, forgotten by her three sons on the south coast of England (daughters for life, sons until they get a wife, eh), as I read the ponderings of Britain’s very own Tracey ‘I forgot to make my bed again’ Emin.

“No use investing in the tenderness of my children, between Antoine’s placid indifference and Sophie’s selfish arrogance! My only consolation is she is so morbid that she will come visit me in my grave more often than on Rue Boulard,” is another … not sure whether it’s Emin, but it’s bang next door.

Unlike me … because I crossed the North Sea to get away.

I love you Mmmmunck
Other highlights ensue: I pat myself on the back for observing the crafty sub-text in Catherine Opie’s self-portrait of her nursing her baby.

‘My Dog’s Cuter than your Baby’ is exactly the ‘pick me up’ we all needed after Beyonce. All good art needs an antagonist … hell, make that all goodness.

But while Manjari Sharma and Irina Rozovsky’s five-month iPhone photo exchange ‘To See Your Face’ is thought-provoking, I can’t help thinking it would have been better if they hadn’t both been born within a few years of one another.

And yeah, I love Edvard Munck’s ‘Madonna’ and ‘The Dead Mother and her Child’ – anything by Munck, basically.

Talking of which, maybe I should call the old bird and tell her I love her too.