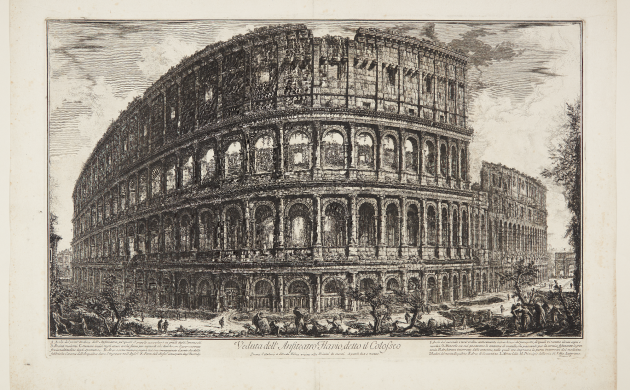 The National Gallery of Denmark is showcasing one of the finest engravers of the 18th century. His large-scale prints, packed with incredible detail, provide much to marvel at.

Giovanni Battista Piranesi is probably not a name that rings many bells unless you’re an art buff. Born in Venice in 1720 to a stonemason father and brought up on the Classics, he was later apprenticed to an uncle who was responsible for restoring historic buildings. His career took off rapidly, as his talents were quickly recognised. He was also a qualified architect and an archaeologist.

Although famous in his own time, if anything his reputation has grown subsequently, and he has been a recognisable influence on architects, artists, film-makers and even computer game developers.

France/Greece vs Italy/Rome
In Piranesi’s time, there was an intense rivalry going on between French intellectuals and their Italian counterparts over which of the ancient civilisations was more ‘civilised’ and sophisticated: ancient Greece or ancient Rome. The French felt that the Romans had somehow corrupted a pure style and over-embellished it, whilst the Italians saw this as a sign of progress and a cultural highpoint.

The ‘Imaginary Prison’ series has been interpreted by some art historians as a contribution to this argument, as in the second series there are some named people being unjustly executed or tortured by Nero’s tyrannical henchmen. The Italians argued that Nero’s reign was decadent and tyrannical because he had abandoned ‘Lex Romana’ and introduced a new legal system based on ideas from Greece – a somewhat arcane point perhaps, but worth bearing in mind when you view the prints.

Piranesi also used the ruins of ancient Rome to promote his point of view, and amongst his best-known works are those depicting the Colosseum: The Forum and Cestius’s Pyramid. On the other hand, his images were not always completely true to life; he played around with perspectives and, for example, the pyramid is much larger than it really is. Piranesi often peopled his images with figures, but they are usually very small and almost insignificant.

Stairways to heaven
Regarding contemporary relevance, anyone who has read or seen a Harry Potter film will immediately be able to recognise the staircases that seem to go nowhere or are moveable. Dutch graphic artist Maurits Escher’s impossible constructions also have their roots in the ‘Imaginary Prisons’ series.

The first state of this consisted of 14 etchings and was published in 1750, untitled and unnumbered. Piranesi later reworked the plates and added two prints, together with numbers and titles for some of them. There is a vast difference between the two states: the first being much lighter, whilst the second really does exude a dystopian doom and gloom.

This series really made his name and they were published in a so-called elephant format – a whopping 550 x 400 mm. They were originally bound into books and designed to be read that way. Later, many of the books were broken up to extract the prints. In many cases, any commentary that went with them was discarded.

Nice little earner?
As a trained architect, Piranesi was interested in design and Egyptian art and antiquities. He created many drawings of ‘Egyptian’ chimney pieces and some of these were manufactured – often to sell to rich English visitors to Rome passing through on the Grand Tour wanting to take something back to furnish the stately home and show off their good taste.

These chimney pieces were not based on any one particular Egyptian original, but were created from a number of sources, with a good deal of flair and fantasy.

It’s all done by mirrors
In the centre of the exhibition there is also a new installation created by AVPD (Aslak Vibæk and Peter Døssing) utilising two-way mirrors that form rooms and corridors “creating an architecture with an impossible perspective” – all very much in the spirit of the Italian master.

With more than 120 works on show, you can really delve into Piranesi and have fun trying to decode some of those hidden meanings!