St Patrick’s Day 2022: Embracing the feast day on which everybody is Irish at the annual parade

Since its debut in 2005, the Copenhagen St Patrick’s Day Parade has established itself as one of the capital’s highlights of the year 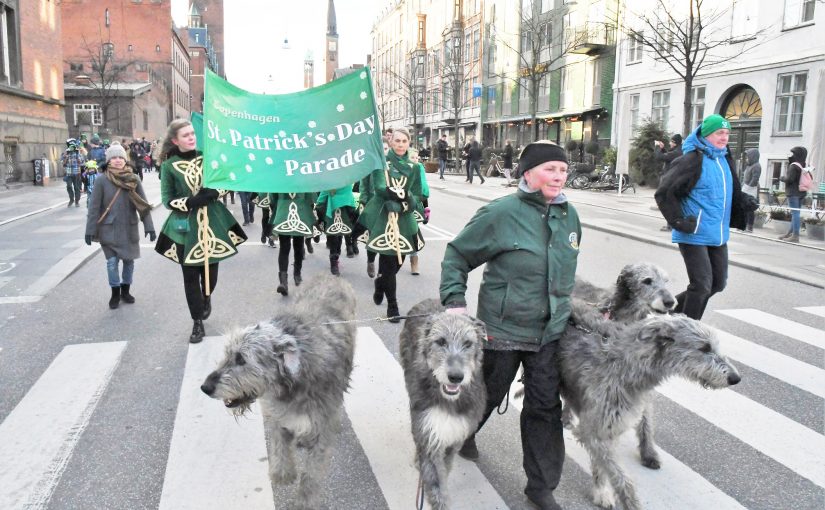 St Patrick might be the patron saint of Ireland, but on his feast day on March 17 “everyone is Irish!”, according to the organisers of the annual parade through the streets of Copenhagen.

With its origins as a 17th century religious festival for feasting, the holiday has grown in international appeal over the years and is now synonymous all over the world with shamrocks, lively parades and overall merriment – an occasion for everyone to enjoy!

And for nearly two decades now, the Copenhagen St Patrick’s Day Parade has been turning the streets awash with green!

Going green
“The motivation for organising a big event like a parade in Copenhagen was to give the Irish expats living here, along with people from all nationalities who are fascinated by or feel a connection to Ireland, a platform where they can celebrate Ireland’s national day with the whole family at a family-friendly event,” the parade’s co-organiser Marianne Green tells CPH POST.

“The ‘Everyone is Irish’ slogan we chose felt right because it is so important for us to invite and engage people who are not familiar with Irish culture or are not Irish and send a message that we can all share and take part in each other’s cultural celebrations across nationalities and culture.”

A testament to the cultural inclusivity of the city, each year the celebrations continue to grow as Copenhageners delight in a taste of all things Irish.

With so much live music, face painting, traditional dancing and Irish coffee to consider, CPH POST is here to give you a rundown of what is planned for the day.

Return to Rådhuspladsen
The City Hall Square will act as the main location for the festivities. A large tent will be set up in the square to accommodate face painting and a costume shop to buy all the necessary green accessories for the parade, while live entertainment will take place on stage. And, of course, no St Patrick’s Day tent would be complete without an Irish café and bar.

The festivities commence at 13:00 with the opening of the café, serving Irish whiskey from Tullamore DEW, Irish beer and stout from O’Hara’s Brewery and hot chocolate. Make sure you try one of the custom-made St Patrick’s Day cookies baked specially for the occasion.

Free face painting for children will take place inside the tent between 15:00 and 17:00 to make sure they look properly festive!

It is important to remember to wear green to the event – but just in case you forget, a costume shop will be open inside the tent where you can buy some last minute shamrock-inspired apparel.

Next to the tent in the square, an open air stage will play host to live folk music and traditional dancing performed by the Dark Green School of Irish Dancing from 15:30 – including a set performed by The Early House – right up until the parade is set to begin. All the best of Irish musical traditions will be there to lend City Hall Square a distinctly Irish tune.

Join the parade
Anyone wearing green can freely take part in the parade and walk along with the likes of the Copenhagen Showband, the Bodhrán Band and the Dark Green School of Irish Dancing.

GAA, the city’s Gaelic football and hurling club, will also be arriving at 16:00 to take part in the parade, with talk of a few demonstrations before kick-off.

Ian Burns returns this year to lead the procession as St Patrick himself, and a few four-legged companions in the form of Irish wolfhounds and terriers will follow behind – doubtlessly wagging their tails through the streets of Copenhagen.

Make sure you arrive well before 17:00 to secure your spot in the parade – and again, don’t forget to wear green!

The parade will conclude with one more song from the Copenhagen Showband: “a parting glass to finish off a great day”.