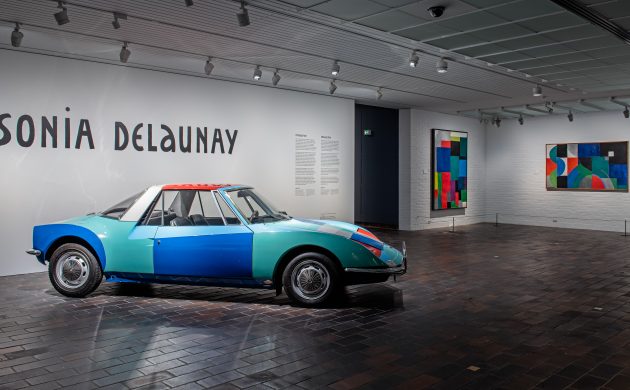 The chronological staging of the ongoing Sonia Delaunay exhibition at Louisiana (which runs until June 12) profiling her contribution to 20th century art and fashion lends itself to highlighting the astounding prescience of her work.

In the same way important US playwrights like David Mamet have always been ten years ahead of the game, so too was Delaunay, an extraordinary visionary whose adult life more or less bookmarked the century.

The Russian-French artist’s colourful but blurred orange-sellers and flamenco dancers in the 1910s, painted in Spain where she was doing her best to distance herself from the horrors of WWI in her adopted homeland, are evocative of the decade to follow: the Roaring 20s.

Through the way her work is presented in the exhibition, the decade to come is gradually coming into focus, and the curator should be applauded for that.

Overall, in this early part of the exhibition, you’re left with an overall visualisation of sound. After all, the silent movies of the time, which dominated the collective imagination and were influential on Delaunay’s work, did pretty much the same thing.

She herself remarked at the time: “If painting has entered daily life, it is because women wore it.”

But her designs get considerably more serious as we advance into the 1930s and the WWII – past one event, the Wall Street Crash, which Delaunay uncharacteristically didn’t see coming – to the extent you can almost hear the stomping jackboots.

She survived the war and almost everything else that modern life threw at her, remaining relevant to her dying day in 1979, six years short of turning 100.

A stunning tribute to a remarkable 20th century woman, this exhibition makes you feel smart – like the viewer of a sitcom who intimately knows the characters and can predict the outcome based on their tragic flaws.

But there’s no tragedy here: only the sense we’ve witnessed the life of an extraordinary artist who prevailed despite the patriarchy whilst enjoying every single minute.