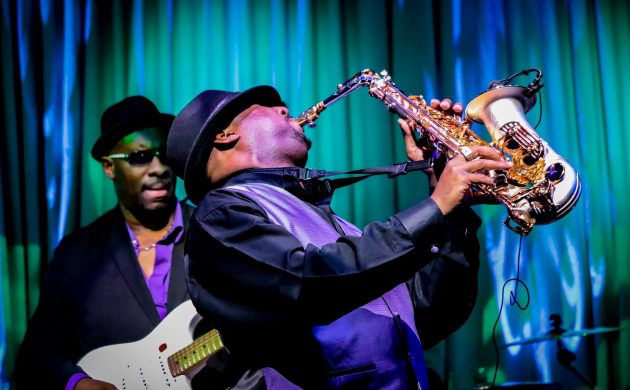 American tenor-saxophonist Ned Ferm is a stalwart of the Danish jazz scene. Despite his multifaceted and agile sound, an unmistakable timbre permeates his many collaborations. He has appeared on records by Nicolai Munch-Hansen, Anderskov Accident, Maria Faust, the Kresten Osgood Trio and his own 2014 solo release, ‘Spent All the Money’. For this concert, Ferm is joined by Jeppe Skovbakke on the double bass and Rune Kielsgård on the drums.

Bergcrantz’s potent and aggressive playing is a vestige of the 1970s and 80s sounds of Freddie Hubbard and Woody Shaw. His much celebrated physical and rhythmic playing is of the sort to blast back loose hair and leave drinks in hands forgotten. When the ‘Best Jazz Trumpet Player in the World’ prize-winner appeared at Montmartre last year, it cost close to 300 kroner to watch him, so consider this a snip.

Nikolaj Hess (piano), Anders ‘AC’ Christensen (bass) and Mikkel Hess (drums) have been playing together since childhood in Vejle. For years during the Jazz Festival, they have been playing a string of nightly residency gigs called Spacelab Salon, at which the audience can enjoy an evolving sound from day to day. “In short, it is the best piano trio in Denmark and Nikolaj Hess is one of the most innovative jazz pianists today,” reported Downbeat Magazine.

Still just 26, Jakob Dinesen is already one of Denmark’s leading jazz saxophonists. Known for playing an Americana-inspired crossover between rock, folk and country, he made his bones at the Tønder Festival as a young teen where he formed an unlikely friendship with British singer-songwriter Allan Taylor, despite an age gap of more than 50 years! Taylor continues to mentor the young Dane to this day.

Renowned pianist and composer Thomas Clausen is joined by Thomas Fonnesbæk on bass and Karsten Bagge on drums. The trio’s 2007 album ‘Back to Basics’ is economical, harmonic, powerful and measured. In fact, when it was released, Gaffa Magazine enigmatically described the work as having “a presence that is something peculiarly intense and downright virginal”.

Over the past two decades, Ibrahim Electric has become one of the most popular instrumental groups in Europe. Their latest album, ‘Time Machine’, is a tribute to the diversity of the band’s expression, with smouldering mixes of Polish-ethno-disco contending with country influences and everything from crisp soul and jazz, to afrobeat, punk and the acid power of the ‘60s.

The Niclas Knudsen trio oeuvre draws on old folk songs, hymns and ballads to craft something you could feasibly call the ‘Nordic Blues’. Stories of the tribulations, longings and joys of the past mix with the free tones of jazz in a simultaneously new and ancient sound.

The Encyclopedia of Jazz has no doubts about the night you are in store for: “A clever and boisterous improviser and group leader, Copenhagen-born Jan Kaspersen is a bright light in his native jazz.” With influences as diverse as Dollar Brand and Duke Ellington, anything goes!

Few classical jazz pianists improvise as well as Denmark’s Carsten Dahl. Taking inspiration from the likes of Glenn Gould, Keith Jarrett, Bill Evans and Bud Powell, this is a great opportunity to watch him tinkle alone.

Entrust yourself in the safe hands of legendary 83-year-old Danish pianist and orchestra leader for a big band night featuring some of the country’s best musicians playing arrangements of standards. Vocalist Bobo Moreno is the icing on the cake!

This is intimate jazz of the highest class, characterised by intimacy, soul and warmth, along with a unique sense of groove, melody and creative imagination. Saxophonist Jakob ‘Dino’ Dinesen has played in the highest echelons of jazz and pop for the past 30 years.

Anders ‘AC’ Christensen and Ned Ferm have been jamming together since 2001 in various jazz, rock, pop and free-form arrangements. The two legends of the Danish jazz repertoire have been honing their duo project for years. Here they are joined by Jakob Høyer on drums.

This national treasure of Brazil brings a rich musical heritage wherever he goes. The former minister of culture turns 80 just three days prior to the first concert!

Widely considered as one of the greatest guitar players in history, tickets will be in high demand, but fortunately Amager Bio’s a big venue. Who knows: Johnny Depp might turn up.

Probably Denmark’s best female vocalist at this time, here in a duo setting.

Modern jazz with the irrepressible drummer Kresten Osgood in the driving seat.

Denmark’s ‘grand old man’ of the drums in a classic jazz trio setting.

Adventurous big band music from one of Denmark’s rising stars.

Enjoy jazz sprinkled with funk and soul courtesy of the Oilly Wallace Quartet. Learn more about Oilly on page 5.