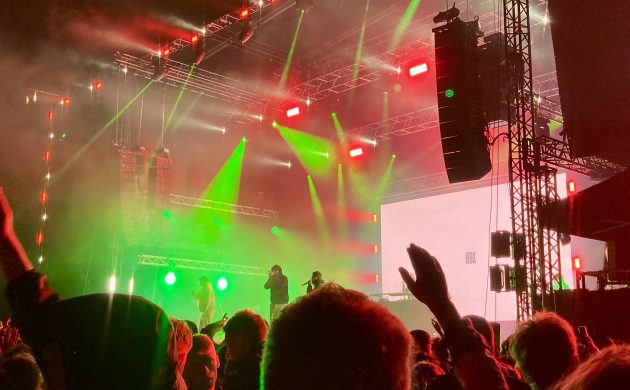 Monday night at the Countdown Stage was an exercise in maximalism.

Before the Swedish hip-hop trio ODZ came on for their 11:45pm appointment, the crowd out front were mostly leftovers from the previous act, Danish pop experimentalist Debbie Sings. Debbie brought dazzling maximalist hyperpop — a disorientating, hypnotising work of glitch magic that must have euthanised every epileptic in a 10-kilometer radius.

The show was as much performance art as it was a festival rouser.

ODZ, then, brought a profoundly different approach to balls-out spectacle.

The three Swedes took the stage with little fanfare and, in their first moments, struggled a bit to cook up momentum with the crowd. But after getting one burner number out of the way, they rolled out their rumbling, uptempo hit ‘pSyKoSeN’, which got the rowdy masses to simmer. The crowd roiled in fist-pumping ecstasy as the ODZ paraded on stage, taking turns breathlessly to belt out their expertise on the subjects of pills and receiving oral sex. Their simple ‘ODZ’ letterhead logo was projected in a boring little display in the background, bouncing around like a default-setting screensaver.

ODZ’s lyrics are predictable, their themes are tired, and their sound is not revolutionary. What they are, above all else, is loud. It’s music you’d expect to hear bursting from a Soundbox in Nørrebroparken, or rattling the tinted windows of a BMW sedan.

Loud, rowdy, and more of the same

To their credit, though, ODZ are great at rousing a crowd. Their beats are thundering and rowdy, with wib-wobbly electro bass woofs ideal for festival speakers. As each track reaches a build-up, the crew works the crowd, rallying the troops with a “fyra tre två en!” countdown right before the beat hits. It’s the same gut feeling you get at the top of a Turbo Drop thrill ride, as the hydraulics hiss and you wait for the tower to hurtle you back towards earth.

But ODZ are a one-trick pony, and the novelty value starts to wear off. The gnarly, thundering drops lose potency as they blend together, highlighting the one-dimensionality of the group’s gimmick. By the time they close out with their best banger, ‘ANNA BOOK,’ I feel like we’ve heard this one already.

Did ODZ draw a crowd? Yes. Was their performance something more than a loud noise? Not really.

But sometimes, often around the eight or ninth beer, a loud noise can be pretty fun.