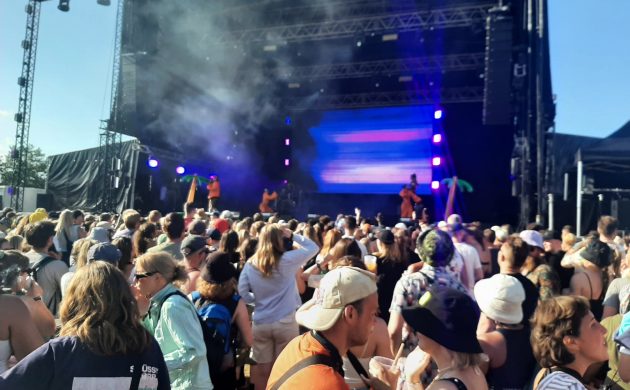 It only took a few minutes before Yakuza showed that she knows how to control a crowd.

“Who’s that bitch?” she kept asking and the audience responded: “I’m that bitch”.

That led up to her playing ‘Den bich’ with a precise flow and fast-paced tempo – an energetic performance that left the crowd wanting much more.

Booing men
Yakuza is a part of the new generation of Danish female rappers who go all in with a fuck-you attitude, heavy beats and sleazy lyrics.

Her name means 8 9 3 in Japanese – the worst hand in a card game – which reflects her rough upbringing with a criminal father and a mother on social security. It’s a rough background that can be seen in both her lyrics and stage performance – as was shown when the crowd was painfully reminded that female rappers still face certain challenges.

A group of young men had been booing and throwing L-signs (the hand gesture for ‘loser’) during ‘Den bich’, but Yakuza wasn’t having any of it. The men were thrown out and the crowd starting booing them, leading the rapper to exclaim: “Now you can get a sense of how it feels to be booed at.”

It was an empowering act that seemed to make the crowd appreciate her straight-in-your-face-attitude even more.

Gimmicky features
During the concert Yakuza repeatedly showed off her excellent rap skills as well as her affectionate singing during the song ‘mdma’.

But the performance did feel gimmicky at times. A young man brought up on stage to be danced for during the song ‘Di$neyland’ – which she explained was what her ex-boyfriend called her nether parts – was followed by a visit from the young and nervous Mads Christian who brought his acoustic guitar and played ‘Sidste gang’ (Last time). The song seemed like it belonged more at an Ed Sheeran concert than with the boss-bitch energy that Yakuza brought.

The gimmicky vibes peaked when the rap group Fuld Effect played the song ‘Jacuzzi’ – a rowdy song that got the crowd going, but most of all seemed like a gimmick.