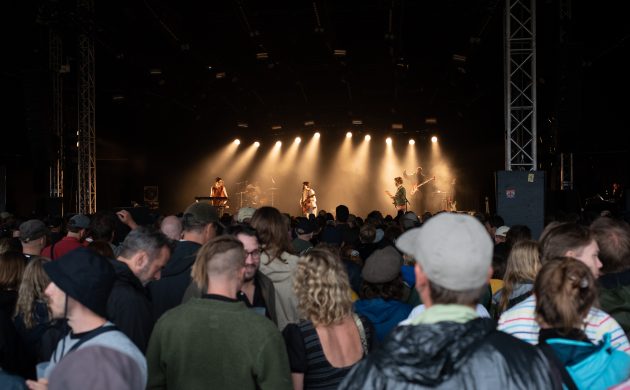 Linsey Jordan is from Ellicott City, Maryland, and began performing as Snail Mail in 2015
July 2nd, 2022 8:27 am| by Jared Paolino

Guitarist and singer-songwriter Lindsey Jordan first performed as Snail Mail in 2015 at the age of only 15 years old. A year later, she released her first EP.

Another two years later – after allegedly fielding 15 different label offers in high school – she dropped her first album, Lush, to critical acclaim. Last night, a year after releasing her second album, Valentine, she took the stage at Roskilde.

Setting the bar high
As a rain-soaked mass huddled under the Pavilion marquee, Jordan and company delivered one of the steadiest, most stirring performances of the week. Some no doubt joined the crowd to escape the intermittent downpour outside, but the music kept them from leaving.

They opened with the title track from Valentine – a vulnerable, forceful, eruptive lead-in for a well-crafted setlist to follow. Two more tracks from that album, ‘Ben Franklin’ and ‘Glory’, came next, and then ‘Speaking Terms’ – a hit off her debut album that remains one of her most popular songs.

With the exception of a mid-show attempt at a joke falling flat, the rest of the performance met the high bar set early on. Switching guitars after almost every song, Jordan delivered an assortment of diverse but cohesive harmonies, managing to keep the energy high without just being loud.

Older songs stand out
‘Heat Wave’ – a song titled in sharp contrast to the day’s weather – made perhaps the biggest impact of the night. Punctuated by brief but striking guitar solo by Jordan, an arresting chorus had the crowd on their feet and clapping along.

‘Golden Dream’ and ‘Thinning’ were other standouts, coming from her debut album and her EP, respectively.

To end the show, it was Snail Mail’s most well-known song, ‘Pristine’, which – according to some – is “pretty much an indie rock masterpiece“.  It’d be fair to call that an overstatement, but either way, last night in Roskilde, Snail Mail delivered.