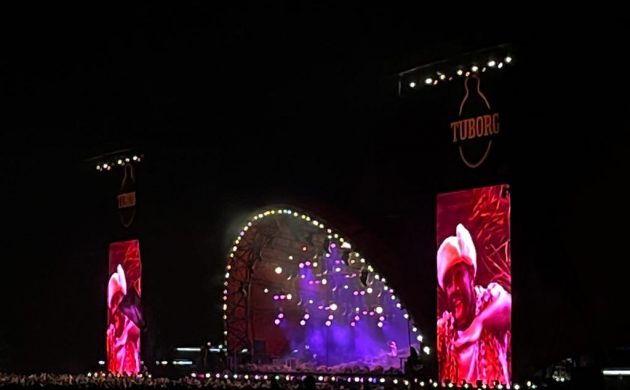 In 2011 when a fresh-faced 20-year-old Californian music prodigy Tyler The Creator made his debut at Roskilde under the auspices of the infamous Odd Future music collective, those present at the chaotic, borderline show knew they’d borne witness to a concert of historic proportions.

Tyler himself rolled onto the stage in a wheelchair, his leg shattered from a recent injury, and the show was a raucous, rowdy affair that culminated in Tyler stage-diving (yes, in his wheelchair) onto a crowd that carried him aloft for several minutes before the safety personnel at the classic Cosmopol Stage had had enough and pulled the plug.

Fast forward 11 years and yesterday’s performance – ultimately one of this year’s veritable Orange Stage highlights in an amputated, post-lockdown line-up – was one that showcased how far rap and neo-soul supremo,Tyler has come since.

And yet that cheeky, witty brilliance fused with razor-sharp lyrics and creative showmanship that was one of Odd Future’s hallmarks still remains, as Tyler is as Tyler was back in the day: a true performer and then some.

Tyler 2.0 returns
Arriving 10 minutes late to greet an audience soaking in the evening downpour, Tyler got a feel of things with a cautiously raucous entry that left him looking somewhat jaded and not quite ready.

With the screens adjacent to the vast Orange Stage fully focused on him, cast against a verdant background from some faraway terraced forest carved from sheer fantasy, Tyler took what would become a familiar seat throughout the show on his stoop and proceeded to woo the audience with his signature easy-going speak.

He nonchalantly introduced himself (under the assumption that there may be some present who didn’t know who he was) and what was going to happen. “For the next hour or so, I’m going to jump around and sing for y’all – is that OK?” Tyler asked, with a cocky panache that perhaps swayed a fan or two and projected either immense self-confidence or a lack thereof – or maybe even both.

A mixed bag of musical influences
And jump around and sing he did, thrashing out well-known bangers like ‘lumberjack’ and the anthemic ‘See you again’, – alongside a few veritable memory lane classics dating all the way back to 2011 (and “the good memories” he had from here.)

The real draw came towards the end, however, as Tyler, now very comfortable on stage, drifted between monstrous, mosh-pit heavyweights such as ‘New Magic Wand’ and more sedate numbers such as ‘Earfquake’ in-between his quick-witted interactions with the crowd. There was also time for a delivery of the reggae-esque ‘Sweet / I Thought you Wanted to Dance’, stamping his versatility, not that this ever was in doubt, on the proceedings.

There was a feeling that this may well not be the last time we see Tyler at Roskilde – a place he loves coming to, by his own admission several times during the show, even if he does live up to the cliché by addressing the crowd as “Copenhagen”.