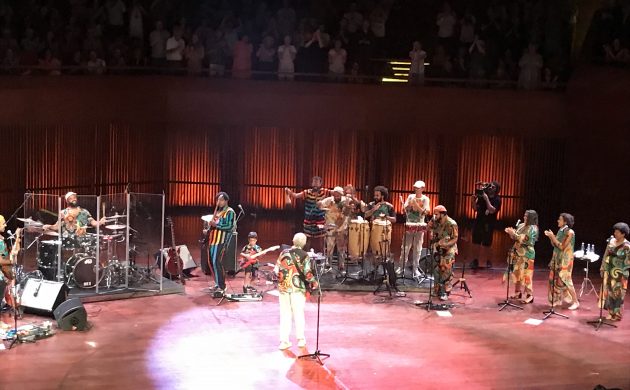 It won’t have escaped the attention of aficionados that two legends of music turned 80 over the last fortnight, even though their energy levels suggest they are much younger men.

Really, it’s a testament to human endurance that while they might not have an ass anymore, they sure know how to get an audience to shake theirs.

Funny to think that one of them envisaged they’d be “doing the garden, digging the weeds” by the time they reached 64.

Star-crossed legends
The first, Paul McCartney, the most prolific of the Beatles, reached the landmark a week before a Glastonbury concert on June 25 described as “one for the ages”.

The second, guitar legend Gilberto Gill, no less prolific bar a spell as Brazilian culture minister, celebrated the big occasion just three days before performing at DR Koncerthuset as part of the Copenhagen Jazz Festival on June 29 – a concert he then followed with another a day later.

Beginning in earnest in the early 1960s, the careers of both men have intersected at times – Gil in 1967 recalls doing nothing for weeks other than continuously playing the Beatles’ seminal work ‘Sgt Pepper’s Lonely Hearts Club Band’.

They have much in common. Both members of successful songwriting duos, they were the more experimental, contributing the lightness that made the output transcendental at times.

More than their partners John Lennon and Caetano Veloso, they take delight from the very sound of music. Raw, experimental, courageous, perhaps a little messy and weird at times, their music reaches sublime heights, although it can feel sometimes overproduced – a pitfall of their openness to all possibilities.

In similar fashion to how the Shakespearean ruler challenges his children to impress him with their dedication, but not in the sinister way echoed in ‘Succession’, Gil throws the stage open to his offspring – of whom three generations are on display.

This deflection is understandable, perhaps, because his singing chops aren’t quite capable of the renditions his songs deserve – albeit vocals that are among the most unique you will ever hear.

If he’s struggling, it’s with the lightness of touch that has been a hallmark of his career. His peaks accordingly come in numbers in which he’s required to belt the words out: like his cover of Beatles (who else!) track ‘Get Back’, which could have been written especially for his talents, and ‘Nos barracos da cidade’.

It’s also obvious how infectious he is as a performer. Everyone he looks at in the stalls is putty in his hands. Jesus got the cripples to walk, but Gil has got them dancing with their zimmer frames.

Proud Pappy
Grand-daughter Flo, ostensibly a Cordelia surely, is the first to give it a go with ‘The Girl from Ipanema’. Her voice is like velvet, her intonation so assured. It’s a cliche but this woman could sing the phonebook. Grandpa’s little girl must make him so proud.

José, his youngest son, has a voice like chocolate. It’s so smooth: like the sound of bubbling lava. And the cadence of his higher notes; divine! It’s enough to make you jump into the magma and surrender your senses.

Of course, Lear didn’t have a son, but with eight children, Mr Gil didn’t leave the odds in the lap of the gods. So, with his singing legacy safely assured for future generations via Flo and José, the question is who is going to pass on his showmanship.

The answer is obvious a mere microsecond after Preta takes the floor. She works the room like she’s a conductor at the New York Philharmonic … or the air traffic controller at Dallas/Fort Worth International Airport.

Of all the Gil children, she’s been the most successful in her own right. And it shows, as she whips the audience into a frenzy. By the time she’s finished her number, every other member of the DR Koncerthuset faithful is out of their seats, shaking, shaking, shaking …

An evening in with the family
This concert wasn’t too long, and it wasn’t too short. And the balance of the onstage ensemble of approximately 15 was also perfectly realised – always somebody to look at and admire, interacting like any family doing what they love.

From the tiny tot heroically carrying a mini electric guitar and taking his bow at the end with delighted aplomb, to the young teen doing his best to hide on stage behind the drums, this family gathering made the Partridges and Von Trapps and even the Jacksons look staid in comparison.

It could just as well be an evening at home with the Gills, where the children are allowed to be kids, and the young adults are given a chance to do what Pappy does.

It had the best mix you could possibly ask for. Mr Gil didn’t hog the limelight and he allowed his family to shine.

And the hips are still shaking at the thought of it.