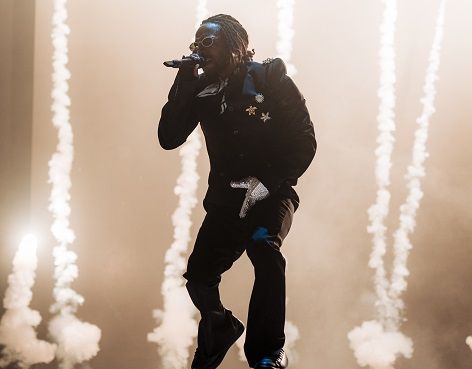 After a tight and respectable 15-minute set from Tanna Leone, Baby Keem turned the excitement up a notch. With the last stragglers trickling in, Kendrick Lamar’s cousin showed he could hold his own. It was the first time of the night that people got out of their seats, but it wouldn’t be the last.

They were ready to see Mr Morale.

The king is here
When it was time, 14 in-sync dancers announced king Kendrick’s arrival.

Before you could see him, you could hear his unmistakable cadence. Lamar hit the stage with the swagger only a champion with his long list of accomplishments could develop.

He had the focus of Michael Jordan in an NBA finals match-up etched across his face. He was just waiting for his moment to deliver. The diminutive dynamo had the presence to light up the entire arena.

While soaking up the adulation of the thirsty Copenhagen crowd, he let them assist in singing ‘n95’. He jumped right into the high-octane cut ubiquitous on summer hip-hop playlists.

The crowd rocked in unison showing their approval for the Compton native. His mastery of being a master of ceremony made him seem one with the crowd.

They won’t take him out his element
On a night with many highlights Lamar dazzled by sprinkling in a spoken word, a capella masterclass.

By the time he got to his girl from Copenhagen reference, the audience’s buzz seemed to have gone up yet another level.

In an anything but ‘Humble’ moment of brilliance, the performance of this smash created a fever pitch.

We really were taken across the full spectrum of emotions. Kendrick sat down vulnerably with evocative visuals as he rapped about his father. He put his deepest thoughts on full display as his head nodded.

This transitioned into the lighthearted ‘King Kunta’ as he commanded the crowd with a steady hand. Unfortunately ‘Loyalty’ and ‘Swimming Pools’ were only played as snippets.

For anyone who thought Kendrick would run out of gas an hour and a half into an arena show, he showed off by closing with a victory lap bang, running around the stage as he brought the warm-up acts back out.