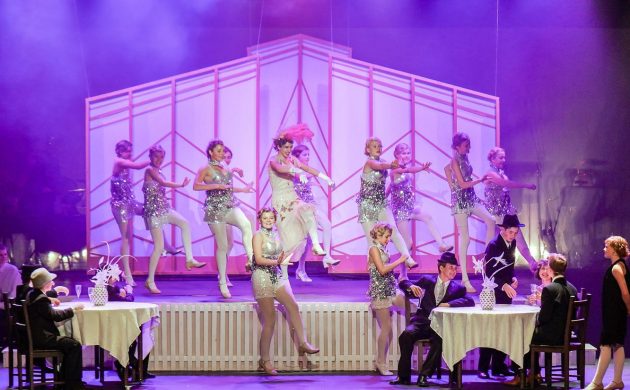 Crazy amazing costumes. Audaciously authentic props. Sass levels up to the nines, Evita-style. No, this isn’t an audition for the latest ‘Teenage Mutant Ninja Turtles film’, but the blown-away takeaway from Rearview Teater’s premiere of ‘Bugsy Malone’ last night at Musikteatret Albertslund from one seriously impressed reviewer.

Denmark’s busiest theatre people
Fedora hat on the table time, with safety catch on splurge gun, let me confess that I personally know the production’s British co-director Russell Collins, and I can testify that he is the busiest person I know here in Copenhagen.

Nevertheless, despite his epic workload he has found the Danish work-life balance because through most of his labours, he has his extremely talented Danish wife and co-director Christina Anthony at his side.

Together they are the founders and owners of the SceneKunst musical theatre enterprise, which has 22 schools (including three international ones) and counting across Zealand and beyond – and then, just for kicks in their spare time, they stage full-blown musicals, making use of the wealth of talent in their classrooms whilst finding plenty more in the wider Danish and international communities.

It’s no exaggeration to already say the bulk of Denmark’s young musical theatre talents are SceneKunst- trained. Give it another decade, and they will hold a monopoly.

The hard work really showed
But back to the hard work and how this was so evident last night. The kids on stage – all 35 of them, ranging in age from 11 to 17 – were so well-rehearsed it felt like every swivel, swerve and somersault was second nature.

The boys fell with such apparent force, their arms must surely be bruised from the constant practising; the girls danced with such grace they must fall asleep every night thinking they’re Ginger Rogers (after all, Fizzy wants to be Fred Astaire); somewhere in Albertslund, there’s a deli owner confused why children keep on asking for capicola and cannoli …

Everything about this production conjured up the sense that these children were living, breathing and sometimes eating the subject matter at hand. At the heart of its success was hard work.

You have your five, we’ll try 35 … that’s the Rearview way
The one thing I’ve noticed about Rearview is how they like to do big scenes. Take the song ‘Bad Guys’, as performed by Fat Sam’s Gang. In the songbook, that’s five people on stage – plenty, right? No, in the directors’ minds it’s how many have we got when we factor in costume changes for the next scene: 28, 30, 32? It’s full-on Carol Reed directs ‘Oliver’. Ditto, the audition scene, which was uproarious and inspired, and ‘Do you wanna be a boxer’ segment, which ended in brilliantly choreographed slow-mo.

They also like to make full use of the theatre. We’ve got actors sitting among the audience, chasing one another through the aisles and overseeing assassinations in the galleries. It underlines how musical theatre should be, above everything, good fun.

And finally, they don’t compromise on costumes and props. In this production, Christina Anthony has demonstrated such exquisite taste in clothing the Prohibition Era showgirls and gangsters that she should be up for a fashion award.

Standout performers on the night
‘Bugsy Malone’ provides a lot of memorable roles, and while this was a great team effort, it would be remiss not to mention a few of the individuals who shone on the night.

From the moment they started to play the overture ahead of Roxy Robinson’s unfortunate demise, the live nine-piece band were a constant source of warmth, cosily tucked away at the back of the stage, sometimes silhouetted for choice effect.

Frederik Thoft as Fizzy was the standout singer (loved the dancer who joined him on stage), followed closely by Lisa Maria Birk Pohl as Blousey and Ella Daisy Anthony-Collins as a wonderfully screechy Lena Merelli.

And finally, kudos to Jokull Logi Hjartarson as Bugsy and Selma Erkut as Talullah for underpinning the production with untold confidence and belief in what they were doing. It was like they empowered those around them to bring their best to the table.

Tak for a great evening out
In conclusion, well done kids! It was a great night, and as I’ve already explained in another piece, you don’t need a degree in Danish to enjoy this to the core.

Opening night nerves are understandable, but as this run progresses (see below: every day until Oct 26 bar Oct 24), you’ll find yourself hitting all of your marks, finding your spotlights and firing your splurge guns on cue with the Tommy Gun sound effects without really thinking about it. Thanks for a great evening!

And Russell and Christina … the autumn break was supposed to be your holiday? Enjoy some time off after this, will you!? You’re putting the rest of us to shame with your efforts.