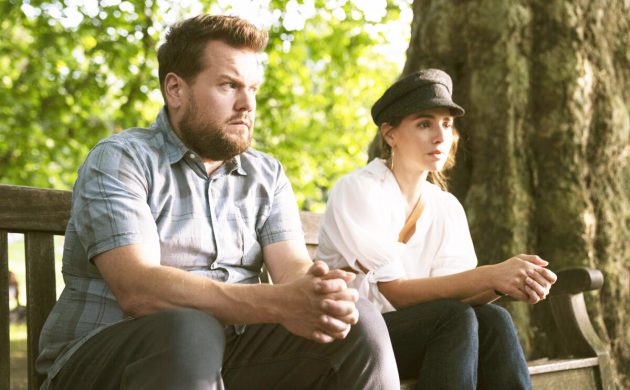 In real life, his wife is allergic to egg whites. The fictional version is just allergic to whites
November 12th, 2022 5:00 pm| by Ben Hamilton

Sometimes life imitates art: after all, it wasn’t long ago that the comedian Volodymyr Zelensky starred in a TV show as a high school teacher who surprisingly becomes president, or that a 21-year-old Robert Downey Jr played a junkie in Less Than Zero.

Sometimes, it’s the other way round. Felicia ‘Snoop’ Pearson was a major villain in seasons four and five of The Wire, but did you know she was a teen murderer in real-life too? Art imitated life to the extent the character took on the actress’s real name.

But it’s rare when art imitates life and life imitates art – seemingly at the same time, so respect to the actor and TV host James Corden, who recently got into a spat with staff at New York restaurant Balthazar. In his outspoken criticism, he clearly knew what he was talking about: “You can’t do your job! Maybe I should go into the kitchen and cook the omelette myself!” It was no surprise to learn, days later, that his next major acting gig is as a chef in Mammals (Amazon Prime; Nov 11).

Cooking up a feast or two
Despite being vilified in his native Britain, Corden has enjoyed massive success as the host of The Late Late Show, and appearances in the likes of Gavin & Stacey, Paul Potts biopic One Chance and Into the Woods have proved he can really act … and sing … too. It’s not bad going for a chubby kid who was mocked loudly when he turned his back on awful teen soap Hollyoaks and said he could do better.

It would be wrong to say that Mammals, written by acclaimed playwright  Jez Butterworth (Jerusalem and The Ferryman), is literally a kitchen sink drama as most of the action revolves around a failed marriage. So while we get to see Corden dressed in his whites and headbutt his sous chef, it’s not really about the restaurant industry.

That’s just as well, as a long list of actors have found out to their cost that chef dramedies don’t fare well with audiences: from Jon Favreau and Bradley Cooper in the US to Lenny Henry and Alan Davies in the UK. But 2022 has been proving all the naysayers wrong, serving up morsels worthy of the high standards set by reality TV in the late 1990s.

British actress Sarah Lancashire deserved an EMMY for her turn as Julia Child in the charming series Julia (HBO Max; 76 on Metacritic) earlier in the year, while The Bear (Disney; 88), a Chicago drama set at a dysfunctional restaurant that namedrops Noma and Hart Bageri along the way, set new standards for the genre, superbly depicting the knife-edge conditions depicted by the likes of Boiling Point, the 1998 docusoap that introduced Gordon Ramsay to the whole world.

And now British royalty himself, Ralph Fiennes, is taking a stab at being a chef in The Menu (cinemas; Nov 17; 73). Described as a black comedy horror, and co-starring bright young things Anya Taylor-Joy and Nicholas Hoult, this promises to be a feast for all the senses, but will it go down the cannibal route favoured by Timothée Chalamet road movie Bones and All (Nov 24; 75)?

If there is a common theme, it’s that many are spawned from popular films from 30 years ago. First up is Willow (Disney; Nov 30) with Warwick Davis reprising his role as the loveable dwarf hero. Also returning from the original are Kevin Pollack and Joanne Whalley, but not her ex Val Kilmer – one time capsule sequel was enough for him.

Wednesday (Netflix; Nov 23) is the series we all wanted when The Addams Family (with a diabolical theme tune by MC Hammer) was revived in the early 1990s. Christina Ricci as the daughter was the only spark in that bore of a movie, and she has an obligatory cameo in this affair, which co-stars Catherine Zeta Jones and Gwendoline Christie, among others.

Miniseries The Santa Clauses (Disney; Nov 16) continues the saga of the ‘Average Joe who didn’t sign up for this’ played by Tim Allen, but with a ‘now needs to retire’ angle. The material is so good it couldn’t be contained in one film.

So .. like Catherine of Aragon?
Talking of resurrections, Guillermo del Toro, whose Cabinet of Curiosities can be enjoyed on Netflix, is the latest director to take on Pinocchio (cinemas; Nov 14; 93). The result blows away all the recent incarnations, with David Bradley (who saw this stardom coming when he patrolled Hogwarts with a cat) triumphing where Tom Hanks and Roberto Benigni have failed in recent years. Other sequels include Black Panther: Wakanda Forever (cinemas; Nov 9), Enola Holmes 2 (Netflix; 62), Amy Adams and Patrick Dempsey back again for Disenchanted (Disney; Nov 18) and Confess, Fletch (cinemas; Nov 24; 66) with Jon Hamm taking over from Chevy Chase. Meanwhile, Spirited (Apple; Nov 18) is yet another reimagining of A Christmas Carol, this time from the ghosts’ perspective, with Will Ferrell onboard.

Things get a bit spooky in Irish period piece The Wonder (Netflix; Nov 16; 71) with Florence Pugh in yet another acclaimed role – the same can’t be said for Don’t Worry Darling co-star Harry Styles in My Policeman (Amazon Prime; 49). The critics had little time for Halloween Ends (cinemas; 47) – let’s hope it’s finally done this time – and Prey for the Devil (Nov 17; 38) is more nonsense from the killer nun stable. The Good Nurse (Netflix; 65) starring Jessica Chastain might sound like similar fare, but it is in fact a real-life drama about one of America’s most prolific ever serial killers, portrayed here by Eddy Redmayne – a warped tale as so many hospitals were complicit in his spree out of fear they might get sued. The Stranger (Netflix; 74) tells the story of a slightly less prolific killer. It’s atmospheric but a little plodding at times.

Female empowerment is well represented this month, with Harvey Weinstein takedown She Said (cinemas; Nov 17) leading the way – Carey Mulligan and Zoe Kazan are the heroines who bring him down. Viola Davis is equally badass as an African warrior fighting the British in modern day Benin in The Woman King (cinemas; Nov 24); The Swimmers (Netflix; Nov 23; 56) charts the extraordinary journey of two girls who managed to swim away from Syria and end up at the 2016 Olympics; the pro-abortion sentiment of 1960s-set drama Call Jane (cinemas; Nov 10) with Elizabeth Banks and Sigourney Weaver couldn’t be better timed; and Jennifer Lawrence plays a soldier recovering from a traumatic head injury in Causeway (65; Apple). If you need cheering up after all that, The People We Hate at the Wedding (Netflix; Nov 18) could be a good outside bet. With Allison Janney and Kristen Bell lending star quality to this US-UK culture clash, it will be the Netflix film we’re all watching in late November … even if it’s shit.

A fair number of our cinema selections are already out there due to this column taking a month off in October.  That meant we weren’t left with egg on our face getting excited about the first David O Russell film for seven years: Amsterdam (48). DC Comics offering Black Adam (41) with The Rock also flopped badly. Faring a little better were British trio See How They Run (60), a whodunnit backstage at Agatha Christie’s The Mousetrap, The Lost King (57), the true story of how Richard III’s remains were found in a carpark, and Mrs Harris goes to Paris (70), a 1950s-set heartwarmer about a cleaning lady who gets obsessed with haute couture.

The latter stars Lesley Manville, completing a busy autumn for the in-demand Brit. She’s apparently brilliant as Princess Margaret in The Crown and also a standout in Sherwood (DRTV; 90) and needless remake Dangerous Liaisons (58). Did you know she was the first of Gary Oldman’s five wives. One more and she’s a quiz question connecting Tommy Lee and Catherine of Aragon.