In related news, Moderaterne wants to decriminalise the possession of all drugs when it is clearly for personal use 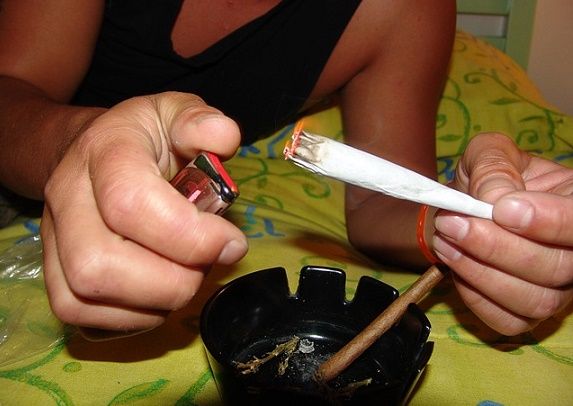 Between September 1 and November 21, Copenhagen Police arrested 17 such individuals for selling cannabis, according to Berlingske.

Fears they cannot escape environment
“Somebody has released a handbrake,” noted Inspector Tommy Laursen. “In the past, Christianites would have intervened and shouted at them.”

The police fear that should the youngsters lose their stash or money, to the police or other criminals, they risk being in debt to dealers higher up the pyramid and unable to escape the environment.

Moderaterne: Decriminalise drug use!
In related news, Moderaterne would like to see the possession of all drugs decriminalised, providing they are for personal use. Selling drugs would still be an offence.

The prospective government party, which is led by two-time former PM Lars Løkke Rasmussen, maintains the penal system should be reserved for prosecuting those that harm others, not themselves.

Stigmatisation sends people underground
Its spokesperson, Nanna Gotfredsen, herself a lawyer, told Berlingske that while decriminalisation was not a perfect solution, it should be for all drugs – not just cannabis.

“Criminalisation is stigmatisation, and the stigmatised tend to go under society’s radar and do not seek help,” she explained.

Campaign launched to warn teens of dangers of cycling drunk
Already by the end of their teenage years, at least 30 percent of young people will have ridden a bicycle when they are too drunk to control it properly, according to a survey carried out by Wilke for Rådet for Sikker Trafik. The safety council is accordingly launching a campaign to address the problem, namely by encouraging young people to look out for one another and stop each other from cycling whilst drunk. However, 12 percent said they saw nothing wrong with it. “They risk serious injuries, such as skull fractures or bleeding in the brain, which could cost them their lives,” warned Emilie Øberg from the trauma centre at Rigshospitalet. Boys aged 16-19 are more likely than girls to cycle when very drunk: 34 to 26 percent. The campaign started today and will continue until December 18.

Former Cold War bunker up for sale near castle in Tønder
A former Cold War bunker in Tønder Municipality in southern Denmark is up for sale. Some 206 sqm in size, the copper-walled bunker was in fact built near the end of the Cold War as a residence for the police, emergency services and mayor should the Soviet Union launch an attack. It still has an EMP data security room. KLH Erhverv, which has put the property on the market, is quietly confident the bunker is burglar-proof – the only way in is through a 20 cm thick door. However, despite its bedrooms and living quarters, a buyer will not be able to live there. Located close to Schackenborg Slot, it would better suit somebody who would like to store their belongings – wine might be the obvious choice.

Churches cancelling services to say on energy bills, but at what cost?
Churches are increasingly cancelling services to save money on heating bills. For example, the dioceses of Lolland-Falster, Aarhus and Viborg have given all their priests permission to cancel services that they don’t expect to be well attended. In some cases, parishioners are being encouraged to travel further to bigger churches, and some dioceses are organising transport to help them attend. Poul Klenz, a heating expert who advises the Lutheran Church, told TV2 that 1,700 of the country’s churches are over 500 years old and that heating is essential to protect their mostly wooden fixtures, and also guard from mould. Organs, as well, tend to suffer when there is no heating.

Don’t deprive diabetics of drug for the sake of diets, warns association
Demand is high for Ozempic, a diet drug championed on social media by the likes of Kim Kardashian. The Novo Nordisk medicine Ozempic was originally developed to treat diabetes-2 patients, but tests have demonstrated it can be effective against obesity, and GPs, between April and June, prescribed 63,000 packages – up from 13,000 during the same period in 2019. However, the Diabetes Association is concerned its members could miss out should supplies run out, as they have done in Norway, arguing that diabetics should be prioritised. It is also warned that once people stop taking the expensive medication, the weight tends to return unless radical lifestyle changes are made. To qualify for a prescription, users must have a BMI of over 30 and have a chronic illness. Currently, there is no shortage of Ozempic in Denmark where around 900,000 people have a BMI of over 30.

Denmark ranks fourth on Global Expansion Index
Denmark has ranked fourth on the Global Expansion Index – a list of the 20 countries that do the most to support the international growth of their companies. Index compiler Remote assessed how the countries perform in providing brand exposure, investment opportunities and hiring opportunities, as well as factoring in taxes, zoning laws and regulations.  The index was topped by the US. Singapore, Ireland, Denmark, Hungary, Luxembourg, Romania, Switzerland, Sweden and Hong Kong completed the top ten. Remote only considered the 100 countries with the largest GDPs in the world.

Nation’s water consumption fell last year
Water consumption fell in Denmark during 2021 compared to the previous year. Some 965 cubic metres was used, with households accounting for just over a quarter with 245 million. Only 16 percent of industry’s water comes from the waterworks. The vast majority is derived from groundwater drilling (50 percent) and surface water (34). The industries that use the most water are aquaculture (42 percent) and agriculture (37 percent), which used 300 and 269 million cubic metres respectively.