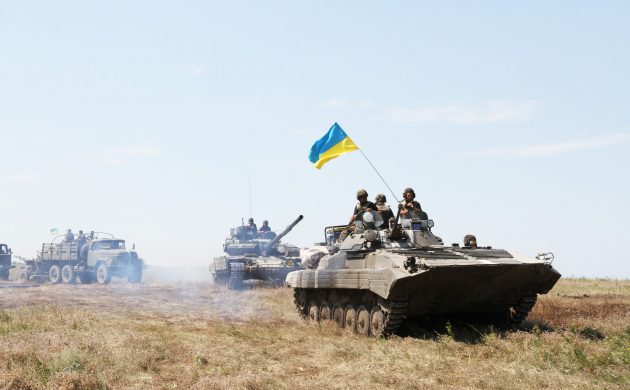 It would move the heart of the EU to Russia (photo: Ministry of Defense of Ukraine)
December 20th, 2022 5:55 am| by Seth Barrett Tillman & Andrew Hirsch

The time is now for the European Union to show leadership and to put forward – with maximum fanfare – a peace plan between Ukraine and Russia that would absorb both nations as full members of the EU.

Proven peacemaker
At first blush, the very idea of the EU extending from Galway to Vladivostok would seem preposterous to those who believe the union has already expanded excessively.

Liberal-minded Europeans have second-guessed allowing former Communist Bloc nations into the EU – what with their more conservative leanings on social issues, as well as efforts by the governments of Hungary and Poland to bend the media and judiciary towards the ruling parties.

Nonetheless, the EU, for all its shortcomings, has been remarkably successful in two major goals of statecraft: preventing violent conflict among its member states, and lifting the economic fortunes of its poorest members.

Attractive proposition
The people of both Ukraine and Russia know they are under-achieving economically.

Prior to the war’s beginning in February 2022, all EU nations save Bulgaria enjoyed a higher per capita GDP (measured in purchasing power parity) than Russia, despite Russia’s gargantuan advantage regarding natural resources.

Moreover, Ukraine remains substantially poorer than all EU members and indeed poorer than Russia itself. How could the peoples of Eastern Europe – who remain outside the EU – find the status quo at all attractive – even during peacetime?

Strict, sensible terms
The precise terms the EU should offer will necessarily be detailed, comprehensive and complex, but the terms should be based on a core of five large objectives:

1/ All Russian and Ukrainian combatants would return to lines of control as they were held prior to February 2022.

3/ Both nations would be required to enact protections for freedom of information, religion and speech to their respective legal systems within six months. Likewise, state media and the courts will have to be guaranteed a measure of independence broadly consistent with the practice of other EU member states. Like all EU members, use of the death penalty must be terminated.

4/ Given widespread corrupt government practices, both new members must allow a somewhat intrusive degree of EU monitoring to ensure that criminality, particularly money-laundering, bribery, and extortion are left in the past.

5/ Neither Ukraine nor Russia shall be admitted to the North Atlantic Treaty Organization, unless both nations are offered admission on similar terms.

Risk of doing nothing
Utopian? Perhaps. But war should give us all focus. The people of both nations are every day  having their bodies ripped apart by bullets, shells and rockets. Homes and infrastructure that took decades to build have been reduced to rubble. Civilian nuclear facilities in harm’s way mean all of Europe is at risk of another Chernobyl-like catastrophe.

The war itself has caused supply shocks and shortages, contributing to inflationary pressures worldwide. The impact of refugees in EU frontline states – Hungary, Poland, and Romania – has been anything but negligible. And the conflict itself may spread.

If this proposal were put into effect, that would be an outstanding result – not just for the combatants, but for all of Europe.

Can Russia afford to refuse?
On the other hand, if Russia were to reject this proposal, then that would be a good result too. Why? If Russia rejects the proposal, then the EU’s offer will cost it nothing. Russia’s rejection will illustrate to all third-party and neutral nations who, and what, has caused the hostilities to continue – with all their associated and consequential harms and costs.

And most importantly, the Russian leadership’s rejection will cost Putin and his political allies the support of millions of Russian voters – because the average Russian (and Ukrainian) would like to hold, and would like their children and grandchildren to hold, EU citizenship – with all the obvious benefits it has already brought to the citizens of Eastern European member states.

Admittedly, what we propose are radical innovations compared to past peacetime practices for EU enlargement. But today is not peacetime – thus, we are called upon to consider extraordinary measures.

Seth Barrett Tillman is an associate professor at the Maynooth University School of Law and Criminology, and Andrew Hirsch is a journalist based in the US state of Washington