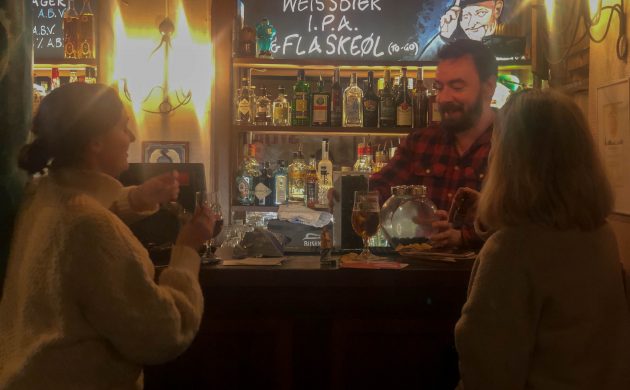 From Frederiksberg Metro, Café Svejk is less than a ten-minute walk. However, on a stormy evening, it was more than enough time to leave us drenched, windswept and feeling more than a little sorry for ourselves.

Our moods were instantly improved upon our arrival, however. Greeted by a cosy and unpretentious interior, we hung up our soaked coats and took a seat at the bar, where it turned out asking for a sour beer was a bad move.

“Sour? What sour?” teased Paul, the Irish manager of Svejk. It was our introduction to a sense of humour that would end up prevailing over the whole evening.

In truth, he never lets a single visitor leave without a grin. With Czech beers as good as Bohemia Regent on tap, we can all do without natural wine or sour beer for a night. 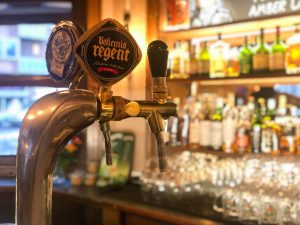 Oasis by Haven
If by cafe, you immediately think of some of the typically pompous establishments seen in the city centre, you’ll be disappointed, as Café Svejk is very much a watering hole.

Well loved and visited for decades as a cornerstone of Frederiksberg, it has long provided beer-loving walkers, sports enthusiasts and joggers with the ideal pit-stop to quench their thirst on the way to or back from the nearby park.

And although it’s been less than a year since Paul and his crew moved in next door to Frederiksberg Have, the Irish charm is flowing as freely as the dulcet coppery notes of the beer it serves.

Good soldier Švejk
Nevertheless, the bar’s main theme, from which it takes its unusual name, will continue.

The black comedy ‘The Good Soldier Svejk’ – a ‘Catch 22’ for World War I – was written by Czech writer Jaroslav Hašek.

It follows the exploits of its main character Josef Švejk, who keeps on managing to frustrate the Austro-Hungarian military authorities with his dumb insolence. It is regarded by many as one of the finest, and earliest, anti-war novels.

Svejk’s unique atmosphere comes courtesy of a rustic wooden interior reminiscent of old East European pubs, while the walls are decorated by some jolly Josef Lada ligne claire illustrations that earned him a Deutscher Jugendliteraturpreis in 1963.

But when I asked why they decided to keep Svejk the way it has always been, Paul replied without hesitating: “Because the beers are amazing!” 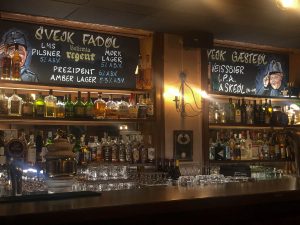 Like a party in the UN
Choosing a Sunday evening – a quiet night of the week – we were able to enjoy, with few interruptions, Paul’s Irish charm and great craic. Friendly, playful and with many good stories to tell, we spent the evening laughing at our own expense and his.

Among others, Paul told us about a drunken night at his old workplace when he decided to take a quick break and have a drink around the corner. It was only when he returned that he realised he had habitually locked the door and all of the punters inside the bar for half an hour.

In Ireland, Paul would have a different patter no doubt, but in Copenhagen surrounded by so many nationalities he makes merry as he skips from one nationality to another: in our cases, Greek, South Korean and Scottish.

Our Scottish colleague, too hungover to drink, is soon converted over to the dark side when she is called not Scottish enough. 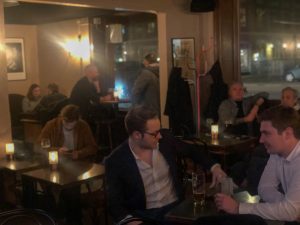 Living in the moment
His enthusiasm and irresistible rhetorical skills are infectious – not too dissimilar a feeling to being in an improv class. There’s something about Svejk that allows you to be yourself and to enjoy the present.

Before we knew what we were doing, we were laughing, clinking glasses and drawing, as pens and postcards miraculously appeared before us.

I kept saying: “It’s hilarious that we enjoy drawing so much! He must’ve done something.” And before you ask, I swear we weren’t drunk yet.

Just in case there was any doubt, our master of ceremonies made everyone in the bar down the 44 percent German digestif bitter Underberg to wrap up the night.

We finally left Svejk with a postcard written in Paul’s beautiful handwriting saying: “For the love of God…. would you please go home!”

Twinkle, twinkle little bar
It would be a mistake to assume that Svejk is an Anglo establishment, and Paul has long mastered the Danish language and holds the regulars tight.

And they might need a bit of assurance over the next year as there are plans to knock down a wall inside to expand the popular bar, as its lack of space can mean they often have to turn people away.

There are no such worries in the warmer months because it can seat 150 outside.

Paul assures us that the theme and atmosphere won’t change very much. With a certain twinkle in the eye, it’s hard not to believe him … providing he remains in charge. 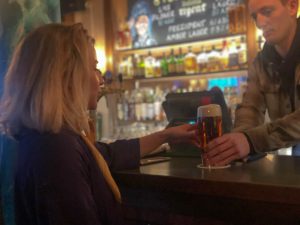