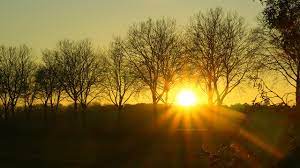 A new month brings new promise after an unseasonably sunny but cold April (photo: Pixabay)
May 3rd, 2021 8:26 am| by Ben Hamilton

“April is the cruellest month,” TS Eliot remarked at the start of his poem ‘The Wasteland’, and he wasn’t wrong.

Indeed, the first half of the month had an average temperature of just 4.2 degrees, which was colder than December.

In total, the 25 nights of frost was second only to 1881 since records began.

Drought index soaring
However, it was sunnier and less rainy … so every cloud … well, that was the point; there weren’t many of them.

Blue skies was the norm, as Denmark racked up its eighth sunniest April in history with 244.7 hours, and on the 19th they combined with the weather gods for temperatures reaching 19.4.

In fact, between April 13 and 25, there wasn’t a single drop of rain, and the total of 18.5 mm was well down on the monthly average of 38.5, leaving the country with a high drought index.

But there was considerably more sleet and snow than in recent years, thanks in part to the arrival of cold Arctic air over Easter, abruptly bringing to an end an unseasonably warm spell at the end of March.

Warmer from next week
Looking ahead, this week promises to be rainy, with Tuesday offering precipitation from your waking hour to the moment you turn in.

It’s probably too early to predict with certainty what the rest of the week will bring, but don’t expect any surge in temperatures currently averaging 8.5 until the weekend – Sunday most probably.

Mark May 9 in the calendar as it might very well be the day you can safely put your gloves in storage and take the tarpaulin off your vintage car.

From May 9-12, temperatures are forecast to exceed 15 degrees every day.