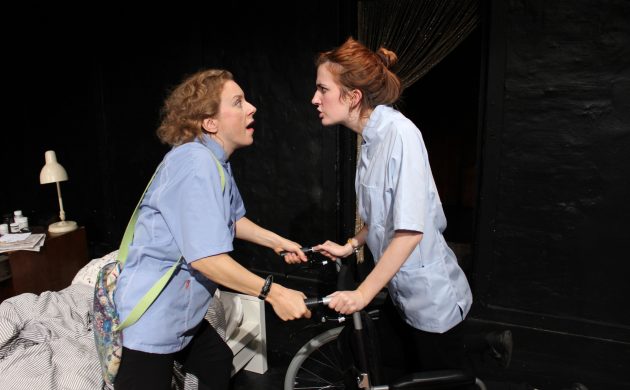 ‘Fly Me to the Moon’ is the 51st production put on by That Theatre Company, and this certainly seems to be a case where practice makes perfect.

The brilliant 85-minute comedy, at Krudttønden theatre for most of October, is directed by Ian Burns, the founder of That Theatre Company, and written by Tony-nominated playwright Marie Jones.

Even in previews, the show was a resounding success with no obvious kinks to be worked out.

Interstellar casting
The play is performed in its entirety by just two actors: Alexandra Jespersen and Dawn Wall. Perfectly cast and expertly staged, director Ian Burns deserves all the plaudits that will surely be coming his way.

Wall and Jespersen had fantastic chemistry right from the start. I would have been content to just watch them gab and gossip in their totally believable southern English accents for the length of the play. Of course, they had so much more to offer.

Through a mix of long dramatic, or more often comedic, pauses and rapid-fire dialogue, with no line stepped on and no joke thrown away, Wall and Jespersen masterfully built tension and demanded the audience’s attention, winning many laughs along the way.

Comedy masterclass
Jespersen for her part put on a physical comedy clinic. With careful attention to posture and facial expressions, not to mention a couple of absurd gags worthy of Peter Sellers, she consistently had the audience doubled over before she even opened her mouth. Then she’d open her mouth and the floodgates with it.

Dawn Wall, no less amusing, played a more understated and right-minded character: the perfect comedic foil to Jespersen’s absurd and sometimes machiavellian character. They were the perfect partners in crime.

Wall’s emotional versatility and the entertaining way she wrestled through some profound internal conflict won me over at the start and kept me onboard throughout, no matter how morally grey the play became.

Upping the ante all night long
The play’s greatest strength was its ability to constantly outdo itself by constantly raising the stakes of the drama and escalating the joke. Do you think that line was funny? You best hold onto your seat for the next one. Do you think this situation is bad? Someone is about to throw a match on it.

When the play finished it got a rousing ovation from all in attendance with the audience demanding four bows from stars Dawn Wall and Alexandra Jespersen. By the final bow, the whole crowd was on its feet and Wall and Jespersen seemed, for the first time all night, a bit uncomfortable up on stage. But, let me assure you, it was no less than they deserved.

The show has something in it for everyone and certainly merits its 205 kroner admission.

Fly me to the Moon

Sep 28-Oct 20, performances Mon-Fri 21:30, Tue 13:00, Sat 17:00; Krudttønden, Serridslevvej 2, Cph Ø; 205kr
The English language premiere in Denmark of Marie Jones’ play ‘Fly me to the Moon’, a comedy play depicting the lives of two nurses presented with an opportunity to get ahead financially, which ultimately spirals out of control. Starring Dawn Wall and Alexandra Jespersen, the play is directed by That Theatre Company’s artistic director Ian Burns