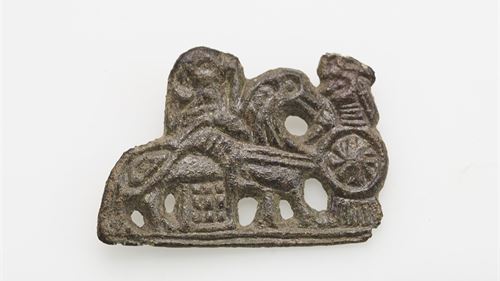 The ongoing archaeological excavation of the Viking fort of Nonnebakken in Odense has revealed the Danish city is actually a bit older than experts had previously ascertained.

Until now, it was assumed Denmark’s third largest city was founded in 988, but ancient jewellery found during the dig has revealed that Odense is at least 100 years older than that. One item in particular, a clothing pin with a motif of a Valkyrie on horseback, is of interest for archaeologists.

“This piece of jewellery alone shows there has been activity and culture already in 850,” Mads Runge, a curator with Odense City Museums, told DR Nyheder.

“It’s important to get Odense’s age correct. These early cities from the end of the Viking Age, as Odense is, play an important role in the formation of the state.”

A future tourism magnet?
The excavation of Nonnebakken is the first of many scheduled to reveal how old Odense actually is. The fort is a so-called ringfort and was 120 metres in diameter. Archaeologists find the fort fascinating because it is still in excellent condition.

Odense City Museums believes the fort could very well become a new tourist attraction in Odense in the future.

Despite Odense’s new-found age, it still has a few more years to roll back before it can catch Denmark’s oldest town Ribe, which is believed to have been founded around the year 700.