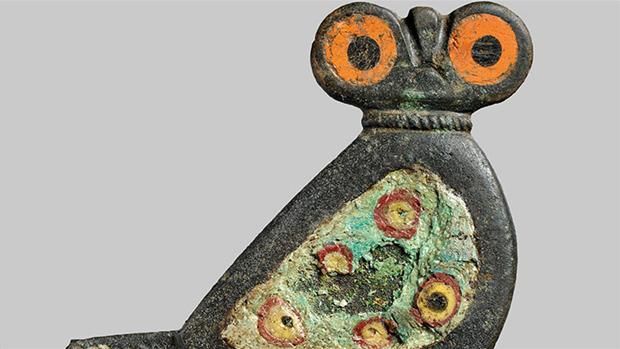 “There are very few of these types of buttons,” said archaeologist Christina Seehusen from Bornholms Museum. “It is likely that someone travelling to the island carried it there.”

The owl was produced in regions along the Roman frontier that ran along the Danube and the Rhine at the time, so it may originate from ancient Cologne or another nearby town. The clasp was usually worn by men to hold their cloaks closed, so it is possible that a man from the island was a Germanic mercenary in the Roman army and brought the owl back to Bornholm with him.

A busy place, back in the day
Bornholm is located far out in the Baltic Sea, but the island was not isolated during the Iron Age.

“There have been a number of discoveries in graves and settlements on the island that show there was contact with many parts of the world including frequent contact with parts of the Roman Empire,” said Seehusen.

Very few of the owl clasps have been found throughout the world.

The Bornholm find was made by Kim Lund-Hansen and Michael Møller, who were using metal detectors to help Bornholms Museum explore an area outside of Nexo on the southeastern part of the island.

The remains of a large building dating from between the 1st and 4th century AD was found in the area.