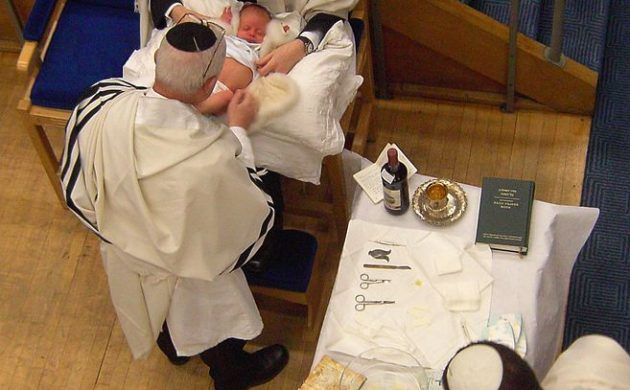 It’s the kind of procedure you’d see on a battlefield, with a bottle of plonk to numb the pain (photo: Cheskel Dovid)
May 19th, 2018 6:00 am| by Mrutyuanjai Mishra

The Members of Parliament in Iceland, a country close to Denmark, have already made a proposal to enforce a ban on male circumcision until the individual is mature enough to make a decision himself.

Female circumcision is banned in many countries, including Denmark and Iceland, but the political parties are split on this divisive human rights issue.

On the table
The issue could soon be on the table in the Danish Parliament: should the state grant religious freedom to parents and thereby allow a cultural practice that involves strapping a baby boy down and cutting off his foreskin, resulting in bleeding and pain?

Intact Denmark is an organisation fighting vociferously to collect signatures for its citizens’ bill, which it hopes will soon be presented to the Danish Parliament. Since January 1, the required number of signatures needed to submit a proposal to Parliament, irrespective of the support of a political party, has been 50,000. Intact Denmark has already reached 44,000 and is inching slowly toward its final goal of 50,000, which is expected to be reached in May.

Additionally, the Medical Association of Denmark and leading doctors, such as Morten Frisch, believe that now is the right time to impose a ban and pass a law in Parliament making it illegal to perform circumcision on small boys.

Political support divided
The movement is forcing political parties to take a stand on this highly-debated issue, and two have been quick to state their position. While government party Venstre has decided to vote against a ban, SF, a left-leaning political party with dwindling support, has no ambiguity on the issue and is clearly in favour of a ban.

Several parties, though, such as Konservative, have decided to give their members free rein to vote according to their conscience. Meanwhile, one of its more prominent MPs, Naser Khader, has come forward to suggest a minimum age for circumcision. He concurs with Intact Denmark and several prominent doctors that 18 would be a suitable cut-off point.

Pain is undeniable
Monica Ritterband, an artist and former journalist, has been a long-time advocate for a ban on circumcision – and her stance has additional clout because she has a Jewish background. Both Ritterband and Naser Khader, who is a Muslim, have given personal accounts of being witness to the unbearable screams of children, expressing the excruciating pain they undergo when the foreskin of their penis is cut off.

The foreskin is not garbage, they argue. Meanwhile, others who want Denmark to be at the forefront of a movement are arguing that the right to an intact body is a fundamental human right, and no-one should be allowed to make that decision except the person who has the body.

At the centre of the debate is the controversy over which comes first: the right of parents to practise their faith and impose permanent and irreversible change to their child’s sexual organ, or the right of the child to make a decision based on maturity and prowess.