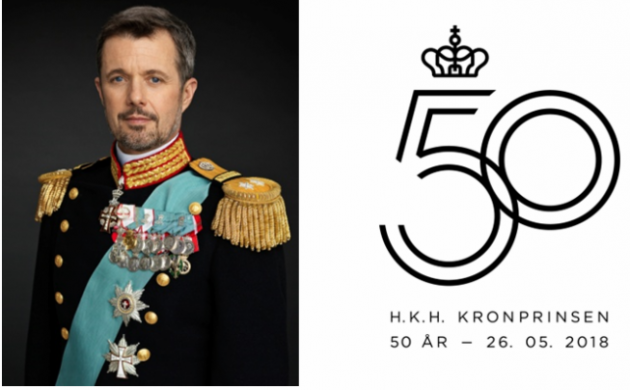 Today, Crown Prince Frederik will celebrate his 50th birthday – along with all of us.

In our democracy it is a paradox to have a hereditary head of state; nowhere else in the kingdom is anybody entitled to inherit positions. There are still counts and barons about, but since 1919, although it is still possible to inherit such titles, any privileges attached to them have been abolished through the constitution.

Not so, however, for the Royal Family. The eldest son inherits the throne or, if there are no sons, since 1953 the eldest daughter – but some day that will probably change to total equality as in Sweden.

Multi-talents all
We are blessed with a royal family of high quality. Queen Margrethe II is a descendent of the French marshal Bernadotte and his common-born wife Desiree. It’s a bloodline that has spawned designers, painters and international personalities.

In her own right the queen has designed ecclesiastical robes and theatrical costumes and fashioned some impressive oil paintings – and not been too shy to exhibit them. Among other things, the late Prince Henrik was musically talented.

However, not much of this seems to have rubbed off on the Crown Prince. His music teacher famously complained about the lack of effort he put into practising the piano.

Physical and intellectual
However, Frederik has shown extraordinary physical skills when facing the fierce and uninhabited wastes of east Greenland – mostly with dog sledges.

He also enlisted to train as the Danish equivalent of a navy seal and completed the course on even terms with the professionals. Each year 600 apply to the elite Frogman Corps, 20 get through to basic training and only four to eight pass.

It is not only about physicality. Frederik has a degree in political science from Aarhus University and has studied at Harvard. He has been the monarch’s representative on the government council and no minister has had reason to complain about his common-sense approach and disciplined preparation.

Now, he represents Denmark on the International Olympic Committee and has shown personality and integrity. Just as he does not tell the government what to do by dint of constitutional constraints, he lets his personal judgement guide his mind and does not let himself be told what to think by anyone. A little noise has been heard in certain political circles, but it died down as people realised that Frederik’s integrity surmounts everything.

A rosy royal future
On top of everything else we have admired his taste in girlfriends. They were smart and beautiful. We have had even more reason to admire his taste in his choice of spouse. Crown Princess Mary has charmed everybody. Her language skills are equal to the crown prince’s, who is fluent in English, French and German. She is also fluent in Danish.

Added to all this the two have produced four beautiful children. Some day we expect a Christian 11th and are pleased that the constitutional monarchy will exist for future generations, as neither the people of Denmark nor the crown prince are showing signs of wanting to change things.

Therefore we join the chorus of congratulators and say Happy Birthday and Many Happy Returns.