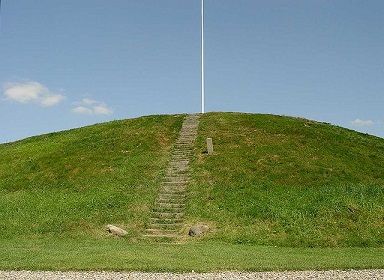 Tourists are being asked to use the steps provided if they want to climb the mounds (photo: Jürgen Howaldt)
February 15th, 2019 4:00 pm| by Stephen Gadd

The UNESCO-listed village of Jelling, once the royal seat of King Gorm the Old – a 10th century Viking who conquered Jutland, Funen and Zealand to establish Denmark – has long been a magnet for tourists.

People come from far and wide to see the famous rune-inscribed stones that are considered ‘Denmark’s birth certificate’, as well as the museum, church and the two burial mounds that are over 1,000 years old.

READ ALSO: Immortalised on stone forever, the founding rock of the nation

A stairway to heaven
Unfortunately, the large numbers of visitors have been having a negative effect on the mounds, as tourists seem unable or unwilling to confine themselves to walking up a set of steps provided in order to reach the top, reports Finans.

An alternative path has now been created where the grass is completely worn away.

“It looks like the entrance to a cow stable in front of the steps,” said the curator of archaeology at Vejle Museum Charlotta Lindblom.

“Because of the weather there are extraordinarily many muddy footprints. It doesn’t look nice,” she added.

In the first instance it has been decided to put up signs requesting tourists to respect the ancient mounds and use the steps.