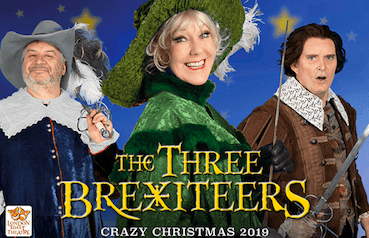 Given that it will soon be time for Christmas, new readers of the CPH POST might be interested to know that every year my English theatre in Copenhagen presents Crazy Christmas Cabaret, a wild, uproarious comedy at the Glassalen theatre in the heart of Tivoli, which has absolutely nothing to do with the festive period.

Every year I write the comedy based on a new theme performed in English by a team of top professional comedy actors. The show is packed with gags, farce, slapstick, ‘panto-inspired’ nonsense, toe-tapping music, insane characters and, most particularly, satire relating to topical subjects.

Three times Trump
For the last three years I have extracted as much satire as I can from the endless egocentricity of President Trump. In my ‘Robin Hood’ show (2016), Trump was a petulant Sheriff of Nottingham eager to build a wall around Sherwood Forest.

In ‘Planet Rump, the Farce Awakens’ (2017), he sought to destroy other planets and take control of the universe.

And last year, in ‘Fogg’s Off: Around the World in 80 Days’, Trump was a sleazy businessman snatching land from the Native Americans and colluding with a Russian count called Bootin.

His big blond buddy
This year I decided to give the US president a rest. Apart from anything else, it’s impossible to keep up with his stream of gaffes, mistakes and stupidity, as it would mean that I would be constantly re-writing and editing my script.

So instead I chose to focus on the British Trump!

British PM Boris Johnson, who is suspected of misusing his previous position as lord mayor of London and is known to have offended many nations as the former foreign minister, is now Britain’s undemocratically-elected prime minister.

He is more literate than Trump but, in spite of his ability to use words of more than two syllables, he is as narcissistic and bombastic in his opinions as his big blond counterpart and thus, I think, deserves a sharply satirical portrayal in this year’s show.

Dumas’ big dummies
I chose to focus on Boris and Brexit way back in January when the deadline for leaving the EU was at the end of March. I planned to write a show based on this outcome. However, nine months later, there is still no sign of any conclusion on a hard, soft or No-Deal exit. At the time of going to print, Boris’s latest deadline was the end of October.

In my profession, we have the saying ‘the show must go on’, and so our show must open on November 11. Thousands of tickets have been sold (I am happy to say) and the audience expects a show called ‘The Three Brexiteers’ loosely based on the famous Alexander Dumas story.

But how do I resolve a Brexit story which, at the time of writing, is unresolved? How do three musketeers in 17th-century France become three Brexiteers, and what exactly are they fighting for?

To find out the answer to these questions, and whether I succeed in guessing the outcome of the real Brexit, is for you to find out when you come to Tivoli. One thing I can guarantee is that this year’s show will be ‘All for Fun and Fun for all!’