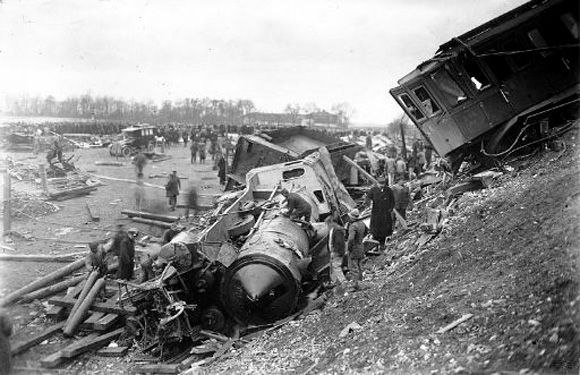 For a Europe used to scenes of utter carnage, it was like revisiting the Somme, but on a train (Photo: jernbanen.dk)
November 29th, 2019 1:58 pm| by Ben Hamilton

These days, our biggest preoccupation travelling along the B-line between the stations of Rødovre and Hvidovre, as expats, would be how unfortunate it might be to break down and have to explain to somebody where you are.

But unpronounceable stations were the least on the minds of the passengers aboard train number 168, the Kalundborg to Copenhagen Central Station service, almost 100 years to the day as it journeyed between the stations – Hvidovre was called Vigerslev back then – grounded to a halt, started to reverse, stopped again and … then somewhat frantically … pulled away excruciatingly slowly.

The rest is history. On 1 November 1919 at 21:01, an oncoming express service collided at full speed with train 168 on a stretch of track surrounded by farmland, even though it only lay 5 km from central Copenhagen.

The accident killed 40 and injured 58 (27 badly), and searching questions about what went wrong on that day to cause the worst train crash in Danish history (the death toll equalled a record set outside Gentofte Station in July 1897) has intrigued transport historians ever since.

Not a lucky break
The signalman at the heart of the collision worked at Vigerslev Station, and many people speculate he might have been confused by an unscheduled train running on the line that day.

A train carrying firefighting equipment to tackle a blaze in Køge had been steadily catching up the 168, so it was somewhat fortunate (or not, as it transpired) when the slower train made an unscheduled stop shortly after pulling away.

An eight-year-old boy managed to fall off the train, sustaining a broken leg in the process – it could have been far worse had he stayed aboard – at which point an alert passenger pulled the emergency brake.

Needing to reverse to retrieve the injured boy, the station signalman took the opportunity to allow the Køge-bound train to pass, whilst instructing train 168 to stand still.

Ironically, perhaps, the passing train would soon be back on its way to Vigerslev after it was deemed its services were more badly needed at the crash scene than in Køge.

Smashed to smithereens
Nobody can dispute that the signalman had safety in mind when he ordered the 168 to stop. But after doing so he wrongly assumed that was an end to the oncoming traffic and permitted it to reverse.

He hadn’t reckoned on the 8064 express service from Korsør to Copenhagen Central Station hurtling towards Brøndbyøster Station, just two stations and 2 km down the track, at its top speed of 120 km/h.

By the time he remembered, he tried calling Brøndbyøster Station, but in vain, and had no choice other than to reach the again halted 168 by foot, which was now attending to the injured boy 130 metres down the track from Vigerslev.

As the express service ploughed inexorably to its date with destiny, the 168 started to pull away back to Vigerslev, but very, very slowly.

The signalman had his red lantern out, frantically waving it at the incoming express service, but despite the lantern and red lights at the back of train 168, it failed to break at all and torpedoed the five rear carriages – all of which were third class.

Given that the 168 train was almost entirely wooden, bar a few steel frames, the express smashed the carriages to smithereens, sending them high into the air and tumbling eight metres down a railway embankment.

Devastation in the dark
Had the accident occurred at one of the stations, at least the salvage team would have been able to work in the light. But on a dark November evening, only random fires among the debris and later the front lights of the Køge-bound service could aid the rescuers.

In total, the sustained damage to both trains – eight of the victims were onboard the express service – amounted to 1.2 million kroner, and a year later the Vigerslev signalman was sentenced to two months in prison.

And that wasn’t the last chapter of the story, as 31 years later the express train locomotive, which was repaired and then upgraded in 1943, was involved in a head-on collision.

The ‘Vigerslev Accident’ has gone down in infamy as Denmark’s deadliest train crash, but safety remains a concern. In the last 30 years, 12 fatal train accidents have occurred in Denmark: three collisions between trains and other vehicles, and nine derailments and/or collisions of trains.

The centenary of Vigerslev serves to remind us of the ever-present need to minimise human error when overseeing the transportation of thousands.

– On 10 August 1967, a communication error caused an express train to ram a stopped train from behind, four km east of Odense. Eleven died and 36 were injured. Trees and a curved line obscured the driver’s ability to see the stopped train ahead.

– On 1 May 1966, a train driver was given a green light to drive full speed towards Hammerum, but soon realised that vehicles were passing across. Though the driver sounded the train horn, the Herning-bound train hit a truck with such force that it was completely demolished, causing the deaths of 10 and injuring a further eight.

– On 25 April 1988, right outside Sorø in central Zealand, a Copenhagen-bound inner-city train derailed as it attempted to switch tracks at too high a speed, killing eight people and injuring 72.

– On 2 January 2019, a Copenhagen-bound inner-city express train travelling across Storebæltsbroen Bridge was hit by objects from a passing freight train, killing six and injuring 16.

– On 2 March 2000, two regional trains collided head-on at full speed at Kolkær Station in central Jutland after a driver overlooked a stop signal. Three were killed and 39 injured. (Madison Bober)