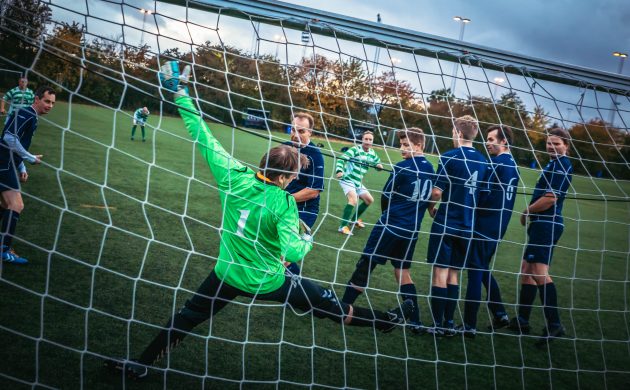 It’s not easy to practice social distancing in a wall though (photo: Johan Karpantschof)
April 29th, 2020 12:31 pm| by Christian W

Aside from the likes of Belarus, Nicaragua and Tajikistan, football has been shut down globally for weeks now due to the Coronavirus Crisis.

But according to a new Danish study, perhaps the world’s most popular sport should be opened up again – for the players at least.

New research from Aarhus University has revealed that the risk of contracting the coronavirus is minimal when playing football.

The research showed that footballers spend about 1.5 minutes out of 90 in close proximity to another player during a game.

The results are based on the movements of professional footballers in 14 Superliga games.

Change and shower at home
Allan Randrup Thomsen, from the Department of Immunology and Microbiology at the University of Copenhagen, supports the findings.

“Sundhedsstyrelsen [the health authority] estimates that you have to be within two metres of a contagious person for over 15 minutes before contact is relevant,” Thomsen told Videnskab.dk.

“So there is no doubt that the time [1.5 minutes] noted in the research is not critical – particularly given that football is played outside.”

Thomsen said that as long as footballers change and shower at home to avoid changing rooms, avoid lots of physical contact during celebrations, and follow general guidelines in terms of coughing on sleeves and washing hands, there are few health-related reasons to ban football.

Despite the findings, the culture minister, Joy Mogensen, said she was sceptical about opening up for football again.

READ ALSO: Euros in Copenhagen hanging in the balance

UEFA gives CPH two weeks
In related news, UEFA has allowed Copenhagen two additional weeks to work out whether it can manage hosting the postponed EURO 2020 tournament next summer.

The Danish capital was due to have an answer by April 30, but the European footballing body has agreed to a two-week extension.

The Danish capital will also host a stage of the Tour de France around that time and the parties involved have said they will struggle to accommodate both big events.

Jesper Møller, the head of the Danish football association DBU, said earlier this week that there was a 50/50 chance of Copenhagen hosting as planned.

However, city mayor Frank Jensen wrote on Twitter on Tuesday that the municipality was working hard to “create a summer we will never forget in 2021”.