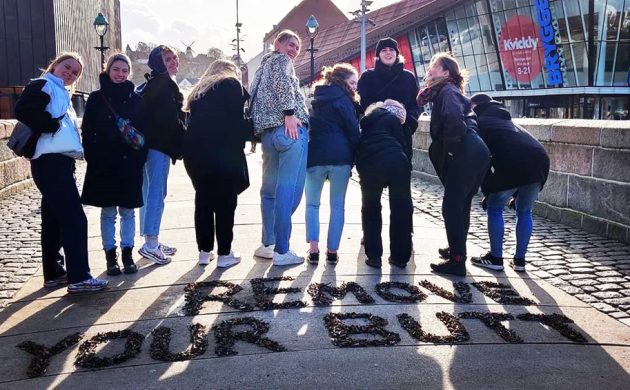 Cigarette butts accounted for 86 percent of all the rubbish collected off the streets of Copenhagen in 2018, according to the city municipality – at a cost of two kroner per butt.

And it would be even more if it wasn’t for the efforts of the likes of Denmark’s Bodil Fosgaard and France’s Alain Muller, who have dedicated much of their lives to removing the butts whilst raising awareness of the problem.

Raising awareness
Each of them have their own distinctive methods. While Fosgaard makes passers-by stop and consider her witty guerrilla messages formed out of discarded cigarette ends, Muller travels the world on his endless quest to nip the problem in the butt.

CPH POST recently caught up with the pair in Copenhagen to discover more about their endeavours. For Fosgaard it was a chance to reflect on the efforts of her city to curb the problem, and for Muller an opportunity to express mild disappointment that Europe’s green capital is no better than most of its counterparts.

Fosgaard is an environmentalist, linguist and artist. She installs arresting messages made up out of cigarette butts on the streets. Over the past years, her artwork has been increasingly stopping Copenhageners in their tracks, whilst wowing social media users – in Denmark and further afield.

What was your initial motivation?
In the past years I’ve been looking for something meaningful to do. As I was interested in environmental issues, I started an initiative called ‘Garbage Run’, which was inspired by Erik Ahlstrom, a Swedish activist who introduced the trend of ‘plogging’ [a compound word of ‘to pick’ and ‘to jog’]. However, I wanted to have a bigger impact than just picking up garbage. One day the joggers who participated in our event started collecting cigarette butts and they couldn’t move ahead so fast because there were so many – it caught my attention.

So how did you come up with the idea of making art?
I realised that it wouldn’t attract attention by just collecting the butts. So I decided to make art out of them. I wanted to make something sarcastic and funny with a serious message. Because Danes are very specific with humour – you can’t tell them: ‘It’s toxic. you are destroying the planet!’ You have to make fun of things.

Where do you get inspiration?
It takes quite some time to come up with an idea and to try my best to make it aesthetic. I draw sketches, look at the dictionary and pay attention to ads or signs on the streets. With this effort, I can invent new funny words. I lend a voice to nature and butts. I let them speak.

How do you manage to get enough butts for your art?
I have a fixed stock. And since my neighbours began complaining, some people offered space so I could store some of them with them. I collect the butts to make massive-scale artworks. But I also throw a lot of them away because they get greasy easily.

How do people react?
I prefer to install the artwork during rush hour as it’s important to interact with people to change their behaviour. Once a homeless guy started chasing me and I noticed he was collecting butts. Now he is doing it on his own from time to time! He doesn’t want anything. I offered some help, but he said he just wanted to help me. He is an amazing guy. Most people come to me and ask what I am doing and appreciate my work. That being said, sometimes I get harsh comments like: ’Get a life’.

How should this problem be solved?
It’s not like Denmark doesn’t have any legislation against flipping the butts. But people would scoff if the police imposed a fine. Ironically, once the police told me they would impose a fine if I didn’t remove my art, even though it was made with already-abandoned butts. It could have been 13 million kroner! Now I have an agreement with [Copenhagen] municipality, but it was ridiculous. I think making people aware of their actions should take precedence, and that they should be given solutions that can be followed. I upload videos to give them some ideas of how and where to keep the butts – should they have a hard time finding a bin nearby. This could be done on a much bigger scale with governmental co-operation.

Muller travels around the world collecting cigarette butts on the streets. He says it’s an easy way to make a trip a bit special as a tourist. Although “it’s nearly a curse to realise how many butts are on the streets every time you walk down them”, he hopes to see a world without them soon.

What was your initial motivation?
Working as a ski technician on the mountain of Chamonix I realised how many butts there are in nature. It broke my heart as snow is often associated with purity. I love travelling and I passionately wanted to make my trips meaningful. Being a smoker myself, I’m conscious of our bad image, so I wanted to get my story out there.

Why do you think smokers litter cigarette butts?
Being a smoker myself, I know the feeling that you just want them to be gone [when you finish]. I didn’t realise how many people just threw them away before I started this. I’m still afraid of going directly to them and telling them off. I’m still waiting to come up with a perfect and versatile line – something funny that can make them cool about it.

How was Copenhagen?
Frankly I had an expectation that the northern countries would be more conscious. But I remember at a ski resort in Norway that I was shocked by the state of the pollution on the slopes. And really, Copenhagen wasn’t so different from Amsterdam on this trip. But I wouldn’t blame those countries as it’s a problem across the whole of Europe. I went to Christiania thinking that maybe with their own hippie-autonomy they would be better at keeping their commune clear of cigarette butts. But it wasn’t the case, so I went back with my equipment to clean up. However, in general, there are a lot of ashtrays and bins in Copenhagen.

How do people usually react?
Normally people who talk to me are environment-enthusiasts or non-smokers. But in Copenhagen I had quite a few smokers. They were curious about what I’m doing and shared their opinion. It might have been a coincidence … perhaps because I recently started cleaning around the bins – it’s a big irony that there are more butts around these ashtray bins.

Who are your best supporters?
Fellow activists. This work is pretty demanding. They’ve been through the same things. They have new ideas – new tools and ways to tackle the problem. I’m lucky to travel so I met quite a few, including the Danish activist Bodil.

What did you do with Bodil?
We went to a bridge and collected 3,000 butts in just one morning. It’s not hard to make a high number in most capital cities in Europe. Later she made an art piece with the butts, which made me think; it was a good way to send a message. We inspired each other. It’s interesting to see how all of us activists have different ways to collect the butts. She went the hard way – she bent over for every butt. I use a broom, which totally changed my life. Another activist in the Netherlands, Bernadette, uses pliers.

– Denmark banned smoking inside in 2007

Smoking by the numbers:

– Around 24 percent of men are smokers and 22 percent of women. Eight percent, both genders, are heavy smokers

– Every year, around 11,300 people are killed by tobacco-caused diseases. They account for 22 percent of all male deaths, and just under 21 percent of all female fatalities. Around 5,000 die of cancer