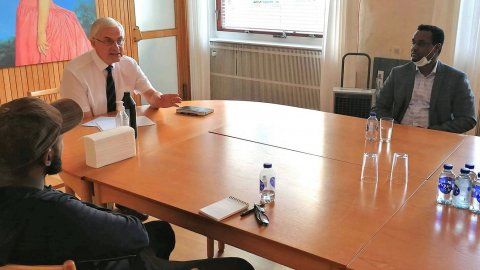 The Somali Association in Aarhus had a meeting with city director Niels Højberg to work together to reduce the infection (Photo: AarhuSomali)
August 11th, 2020 5:18 pm| by Roselyne Min

According to a newly published report by the Staten Serum Institute, ethnic minorities are overrepresented in coronavirus infection statistics.

Of the 756 new cases registered last week, 70 percent involve an ethnic origin other than Danish.

Due to social inequality
Chief physician at the immigrant medicine clinic at Odense University Hospital told TV2 that “the development of infection is not a question of ethnicity, but of social inequality” as many ethnic minorities work in vulnerable jobs where they are exposed to many other people.

Housing prices increased last month
Despite the pandemic the number of homes for sale is currently the lowest in 14 years, which has lead to higher sales prices, TV2 reports. Nationwide, apartment and house prices have risen by an average of 2.1 and 1.1 percent respectively in the past month. However, if inflation over the years is taken into account, these are not record-high prices for houses.

9th graders in Denmark drinking more
According to the recently published report, European Substance Abuse Survey (ESPAD), 9th-grade students in Denmark drink more often than before – 40 percent of both boys and girls have been intoxicated in the past month. In 2019, some 17 percent of students said they had smoked cannabis, compared to 12 percent in 2015. Furthermore, 12 percent of students who had more than five drinks on the same occasion during the past 30 days have also smoked cannabis during the same period. The European report with comparable results from other European countries is expected to be published in November 2020. See the overall report.

Record low number of thefts this summer
According to the new figures from Denmark’s second-largest insurance company Topdanmark the number of thefts in July was far lower than usual. Normally, over 1,000 thefts are reported to the insurance company during the summer. In July 2019, a total of 1023 thefts were reported while the number was only 579 this year – a decrease of approximately 44 percent. The insurance company estimates the figures are partly down to the coronavirus-related requirements such as social distancing and travel limitations.