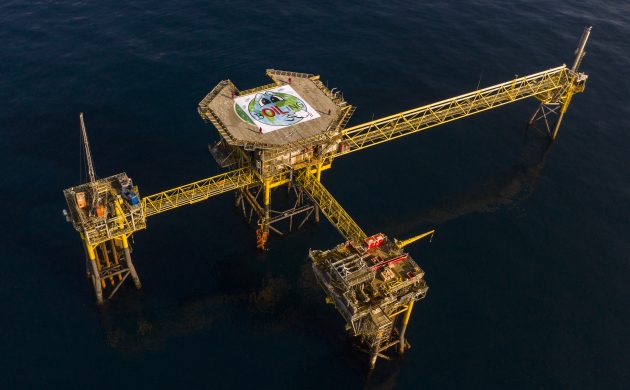 Activists have installed an art installation on the platform, which includes the word B’OIL’ING
August 19th, 2020 4:31 pm| by Dave Smith

French oil giant Total has suspended production on its Dan Bravo platform after four Greenpeace Denmark activists swam 500 metres from the Rainbow Warrior ship to the North Sea platform on Tuesday, where they have unveiled a huge art installation.

Although the platform is unmanned, the company chose to halt production due to security reasons, it said.

Celebrity support
In a statement, Greenpeace Denmark said that the action is aimed at exposing government “hypocrisy” in championing green issues while reaping the financial benefits of fossil fuel production.

Speaking from the oil rig, Danish activist Ida Marie said: “I really hope that we will somehow be able to put some pressure on the politicians to make them take the responsibility that they haven’t taken so far to make our society more sustainable and less harmful. There is simply no way Denmark can defend continued exploration of new oil.”

Significant losses
According to Total, the platform produces 5,500 barrels of oil every day, and the shutdown will cause significant losses for parent company Danish Underground Consortium (DUC).

The activists have enough supplies to remain on the platform for “many days”, Greenpeace Denmark said.

Broadband: No connection between price and speed
An investigation by Denmark’s Consumer Council has found that customers paying for more expensive broadband do not necessarily enjoy faster speeds. After testing a total of 28 ISPs, the council found that Telia, which charges a minimum price of 1,494 kroner over six months, offered the highest speeds. The worst performer was Mit Tele, which charges a minimum of 1,982 kroner over six months. While subscriptions can be offered with speeds of up to 1,000 Mbit/ s, the council said, the vast majority of Danish consumers have little use for a connection of over 100 Mbit / s regardless of streaming or gaming requirements

Maersk issues upbeat results
Despite the turmoil in world markets caused by the Coronavirus Crisis, shipping giant Maersk appears to be weathering the storm well. Despite a 6.5 percent decline in revenues, the global logistics group exited Q2 2020 with a pre-tax profit of 519 million dollars (just over 3.2 billion kroner). According to the company, lower oil prices have reduced freight costs while rates paid by customers have risen. The company added that its financial performance for the full-year 2020 remains uncertain due to volatile bunker fuel prices and freight rates.

Jyske Bank to shed jobs and close branches
Jyske Bank will shutter one in five branches by the middle of 2021 and shed up to 200 jobs, the bank stated on Tuesday. The statement, which was published in connection with its half-yearly results, blames an “increased trend towards digital interactions” prompted in part by the Coronavirus Crisis. Most redundancies are expected to be voluntary, the company said. In the first six months of the year, Jyske posted a profit of just 82 million kroner compared to 1.1 billion kroner in the same period last year

Danish ship in limbo after immigrant rescue
A Danish-registered oil tanker, the Etienne, is effectively in limbo after rescuing a group of 27 would-be migrants from a drifting boat in international waters off Libya. The Maersk-owned tanker has been anchored outside Maltese waters for the past two weeks after authorities denied it permission to dock. The Mediterranean island-state has implemented a zero-tolerance policy to would-be migrants, claiming it has no more capacity to receive them.

Scandic announces redundancies
The Scandic chain, which operates 27 hotels across Denmark, is to make 250 employees redundant. Hotels across the nation have been welcoming far fewer guests during the Coronavirus Crisis, the company said, which has resulted in a significant drop in revenue. The chain currently employs around 2,000 workers in Denmark. In recent months, around  900 of these workers have been furloughed.