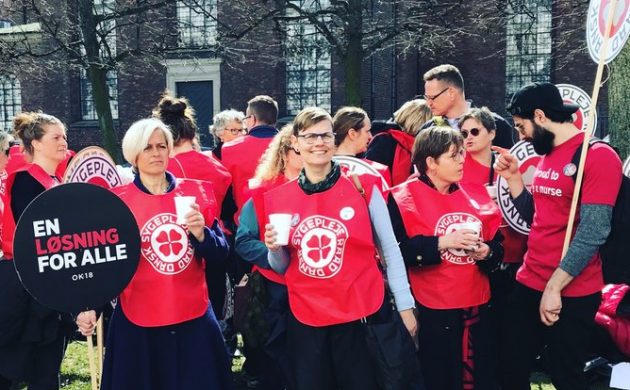 When negotiating, having leverage can significantly enhance your chances of reaching a satisfactory outcome.

That may be one of the reasons why the union for nurses Dansk Sygeplejeråd (DSR) has warned that a strike may be on the horizon following a breakdown in wage agreement talks.

DSR announced yesterday that 10 percent of its members will go on strike from May 20-21 if the situation has not been resolved.

The news coincides with the health sector in the midst of rolling out a historic COVID-19 vaccination strategy, which surely will be somewhat hamstrung should the strike occur.

The disgruntled nurses are unhappy about a proposed 5 percent wage increase over the next three years – with a narrow margin of DSR members voting the OK21 wage agreement down.

“It’s been a tough year for nurses. During the COVID-19 pandemic, many have been on the frontlines and have been pushed to the brink,” said Grete Christensen, the head of DSR.

“But against all odds, they have delivered extraordinarily and shown immense flexibility. In this light, the wage agreement result is a big disappointment for many.”

READ ALSO: This is vaccination control to Major Mette: You’ve really made the grade!

50 years in the coming
Earlier this year, DRS launched the campaign ‘#Lønløftet’ to drum up political support to improve the wage hierarchy of the nurses in the public sector.

As part of the civil service reform (Tjenestemandsreformen) in 1969, the nursing and other female-dominated jobs were placed low in the wage hierarchy.

Nurses, social workers, midwives and pedagogues – jobs traditionally dominated by women – were at the bottom of the public sector wage scale.

And the lengths of education have also changed significantly compared to 50 years ago.

For instance, it takes 6.5 years to become a pedagogue, but that lengthy education is not reflected in their position on the wage scale.

Meanwhile, jobs that are traditionally dominated by men, like police officers, doctors and locomotive drivers, rank well compared to how long their education takes.

The issue of the 1969 Tjenestemandsreformen is gaining momentum in the halls of Parliament, with both Dansk Folkeparti and Radikale calling for a change.

Read more about the issue here (in Danish).