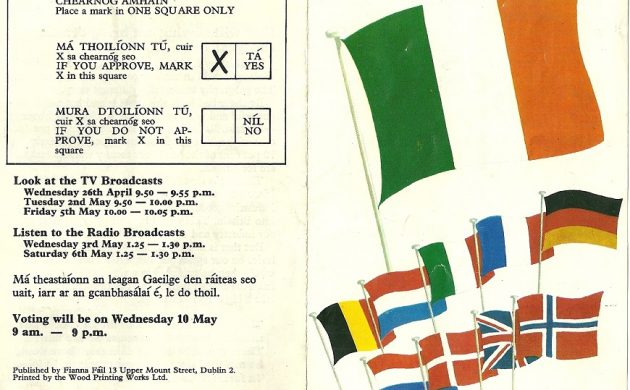 Flag that country! (photo: irishelectionliterature.com)
May 16th, 2021 5:15 am| by Frank Sonderborg

Back in that ‘Yellow Brick Road’ year of 1973, Ireland was EU and Europa-bound.

Pub crawl recruitment
Someone had spotted a headlined advert in one of the papers promising “Jobs in Denmark”. Danfoss, one of Denmark’s finest, were looking for factory workers, and a group of lads from The Goalpost pub had gone to investigate. Later, Gaybo and Wacker regaled us with tales of the interview.

At the Shelbourne Hotel, they watched the ‘Introduction to Danfoss’ slide-show before signing up, leaving behind mountains of cigar and cigarette ends, along with a back room full of empty Carlsberg bottles.

Everyone pretty much signed up, and they were all off in July. Mickser, Chas, Jem and even Wacker. I was stunned.

“Wacker is going?” I asked.

The full whack again
Now Wacker was the original ripped Cro-Magnon man – an overabundance of muscles and body hair, topped off with a werewolf face; the definitive case of arms and the man.

When he came over to our table, he was all excited about the EU dream trip, his pockets stuffed with cigarettes and cigars.

There’s another interview, he told us: “Ta-marrr-ra”.

I wanted in and agreed to go to the Shelbourne Hotel and see what the story was. Wacker and Gaybo agreed to go again – as our tour guides.

Enough Turkish delight
What possessed Danfoss to go headhunting in Ireland will forever be shrouded in the mists and fog of EU commerce. I heard later from a mot (Irish for a friend’s girlfriend) in a Copenhagen bar, whose father just happened to be a director at Danfoss, that there’d been a boardroom meeting about the future of the guest-worker program.

They didn’t need anymore of the ‘Johnny Turks’ who had been arriving in Denmark was the general consensus. So who else?

It came down to a choice between Irlande or Italia. Ireland was the number one choice, because the Danes and the Irish were very similar. We had, it seemed, the same type of bar room humour.

Danish whispers
But back to the story, which finds our heroes outside Dublin’s Shelbourne Hotel one Sunday afternoon … after the pubs had shut.

We didn’t look like a party of international businessmen looking for international accommodation. Not with Wacker leading the way, like Davy Crockett or, to put it more graphically, Davy doing his impersonation of the missing link.

The interview was more of a massed Moonie wedding type of thingy. There was a big conference hall full of eager faces. I could hear the same advice being given in loud whispers around the room: “When the Sergeant Major says it’s time for a tea break, head for the back of the hall.”

There were four big Danes standing in various poses around the room. A ramrod straight man stood in front of a large screen.

“Good afternoon gentlemen, I seem to recognise a few familiar faces here today,” he said, looking down at Wacker and Gaybo.

“There are cigarettes and cigars here for those who smoke. Just help yourselves.”

Wacker was up and over the table, armed with a plastic bag.

Just like yesterday
The slide-show got started amid the noise of rustling plastic bags and the Sergeant Major droning on and on about Danfoss and the rise from rags to riches of its founder, Mads Clausen. Then from riches to mega riches.

He kept smacking the screen with his stick to make some obscure point and, I suppose, to keep us awake. What Danfoss was, or made, went right over our heads.

He smacked the screen a last time, and then the lights came on. The whole room was tense, waiting, for the magic words.

“Now,” he said, “I think it’s time for a …” He never finished the sentence, as he was left talking to an empty room.

Sold out sharpish
Inside that magical room, cases of Carlsberg Special brew were being emptied as quickly as the barman could open them. Available glasses were going into plastic bags and the beer was going down a horde of thirsty throats.

The combination of Sunday with the pubs closed and free beer was just marvellous. I drank four and was feeling dizzy. Wacker was up to ten and going strong. There seemed to be lots of Irish soldiers there milling around, heads back guzzling.

“Okay, chaps,” said the Sarge. “Tea break’s over.” But he was ignored by the mob until the barman called “Sold out”.

‘Big D’ wherever it might be
We lurched back to our seats. The Sarge pointed once again at the table, indicating the cigars and cigarettes. But the table was empty. Nothing – not a sausage, not a dicky bird.

“I see we have a few heavy smokers here today,” was the Sarge’s jokey response. “We better fetch some more.”

I managed to get a few this time before the lights were dimmed and the slide-show resumed. This time the Sarge was droning on and on about Nordborg, that sun-blessed holiday home town of ‘The Big D’.

There were pictures of suntanned, sexy, miniskirted females, biking through fabulous green forests. Here were sailing boats, a wonderland of windmills and smiling people just waiting to share a story, shag, or joke with their cultural soul brothers.

I could not guarantee it, but I’m sure that nobody, but the Danes present, knew where Denmark was located on the map of Europe.

Best Sunday ever
Back then, all we knew about Denmark was the bacon. We sat staring at Sarge, our pal, our bellies full of Denmark’s finest beer – a warm afterglow lighting up our faces.

Everybody was a hero. Wacker was my pal, and all the Moonie interviewees … my pals.

The Sarge was going on about wages and conditions in the factories. Nobody gave a hoot.

“Any questions?” the Sarge asked. A soldier stood up, a bit woozy on his feet: “Is there any chance of overtime?”

That cracked us all up. Jayzus, he hadn’t even signed up, and he was after the ‘overtime blue’.

The question caught the Sarge on the hop. He turned to a chap who went by the name of Jensen. Stepping forward, Jensen said: “There are limited possibilities for overtime.” We all gave a great cheer.

“Any more questions?” Another soldier asked: “Any chance I can borrow a pen?” Once again, we all cracked up.

“Certainly,” said the Sarge, waving his gold Parker pen. I think everybody signed up – even Wacker for the second time.

Leaving a memento
Danfoss ended up with lots of signed contracts not worth the arse paper they were written on.

My memory of that parting, as we all ebbed out, was the sound of a soldier puking his ring up over the hotel’s luxury carpet.

And just as we were going out the double doors, I could hear the Sarge, in an extreme pleading manner saying: “Hello! Excuse me! Gentlemen! Has anyone seen a gold Parker pen?” 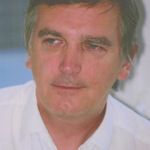 Frank Sonderborg was born in Ireland, lives in the UK and does his best to write interesting stories. This particular tale is based on his experience at a Danfoss recruitment drive in his home town in Ireland in the early 1970s. His short stories have appeared in various UK and US publications. He is currently working on a fictional book about the Irish War of Independence.