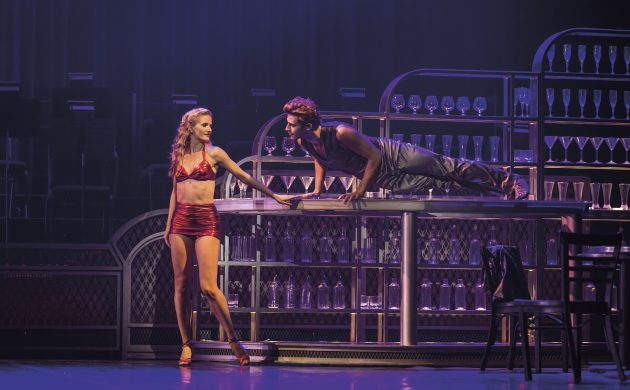 The dancers come and go. Sure, metaphorically – it’s a tough business – but literally tonight, down a staircase from the left.

Splits and repeated twirls from the gents, high-kicks and luscious curls from the ladies. But there are too many lifts, perhaps, and not enough grit.

It’s like a MGM film about gangsters and their malls: if only something would shock the blazers and frocks in the expensive seats, but it’s all too sanitised, like the world these songs would have us believe existed.

Rare highlights
Sure, the voice is everything … but it’s the show’s biggest constraint. Dancing to the well-known lyrics is too safe, like they’re just plodding along. The orchestra stays on track and so do the dancers.

Only instrumentals allow them to breathe. The first half has one, the second half three, you do the maths.

The Take Five instrumental midway through the second half is a highlight – like it’s the product of some genuine collaboration between orchestra and dancers.

Percussion informs their steps, like they’re dancing to the beat, and the musicians feed off their energy. It’s the only time the music could legitimately be described as jazz.

Not only do they sizzle together, but they evolve, bringing believability and narrative to their story.

You almost root for them: she’s snooty, he’s melancholic, but something clicks. Holst emerges in the second act sexy as hell, while Buza broods a masculinity missing with the other dancers.

But really, it’s a cast of too many that offers limited synchronicity.

Even Idi Amin didn’t get a less deserved ovation than this.