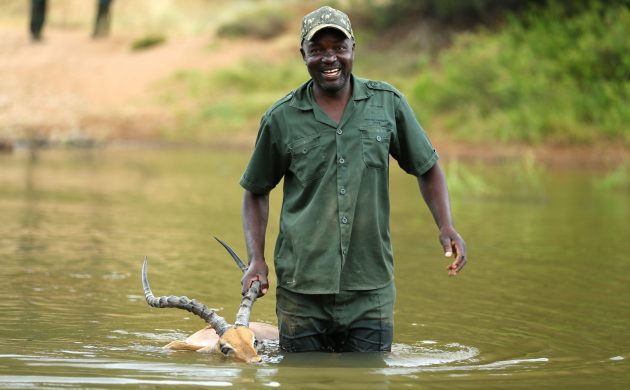 Africans relate to animals differently from the West
November 2nd, 2021 11:13 am| by Jens Ulrik Høgh

In August, Kiambwa Lekitony, an 11-year-old boy from Tanzania, witnessed how a lion killed and ate his three younger brothers. He watched the horrifying scene unfold while sitting injured and powerless in a tree. The four boys were tracking runaway cattle in the bush when they bumped into the hungry lion.

“I will never be happy again without my brothers,” Kiambwa said to a local newspaper shortly after the traumatising experience.

News of the tragedy that struck Kiambwa and his younger brothers never reached Western mainstream media. Just as all the other thousands of human-wildlife incidents in the third world. More than 1.000 lion attacks on humans were registered in Tanzania just between 1990 and 2007, and these are just the numbers from a single country.

Striking contrast
The Western lack of interest in human-wildlife conflicts in Africa is in stark contrast to the enormous media attention to trophy hunting in recent years. Everyone remembers ‘Cecil the Lion’ – an approximately 13-year-old lion killed in Zimbabwe by an American hunter in 2015. Many have also heard of ‘Skye’ and ‘Mopane’ – other old male lions shot by hunters as a part of local game management. These three lions have inspired tens of thousands of outraged posts on social media and thousands of mainstream press articles. Hundreds of Celebrities and Politicians are calling for hunting bans or hunting trophy import bans.

However, the story about Kiambwa and his three young brothers – Ndoskoy Sangau (9), Sangau Metui (10), and Sanka Saning’o (10) – neither triggered the curiosity of Western press nor the compassionate outrage of western ‘keyboard warriors’, celebrities, or Politicians. Why?

There is a considerable gap between how the Western world prioritises wildlife and people in third-world countries, even strictly financially. Animal rights organisations of all sizes in Europe and the US probably raise upward a billion USD every year (in 2014 the 83 largest US animal rights organisations raised 483 million USD). However, the rural African population, who must live with dangerous wildlife, does not benefit from these funds. That fact is also painfully illustrated in the sad case from Tanzania.

According to my local contacts, the family who lost three sons/brothers in a single lion attack got a little more than 400 USD per child from the government to help them pay for the funerals. Indeed, a very sad – actually pathetic – compensation for the loss of three future providers. As far as I am aware, there are no initiatives to raise funds for financial compensation for loss of livestock, trauma treatment for surviving victims, or just a half-decent education for Kiambwa and everyone else in his tragic situation. Yet, we expect rural Africans to coexist with lions, leopards, elephants, and other dangerous wildlife while we ignore these people entirely in the current debate.

Easy to forget
When we dismissively shrug our shoulders while noting that fatal incidents with large wildlife are an unavoidable price to pay for human encroachment on nature, we tend to forget that the people of Europe solved the problem centuries ago.

Once upon a time bears and wolves roamed the entire continent, and leopards and lions inhabited south-eastern Europe until about a thousand years ago. Our forefathers exterminated all the large European cats and reduced the populations of bears and wolves to almost nothing. The few surviving animals in the wake of the eradication campaign were ousted to the continent’s most barren and desolate mountainous regions.

Yet, despite our history, we are blind to Africa’s challenges. Rather than showing will and initiative to re-establish our populations of free-ranging dangerous wildlife, we condemn successful African methods to protect theirs.

I often hear that there is more room for wildlife in Africa than in Europe, which is a gross misconception. Presently the population density across Africa is 45 people per square kilometer, in Europe the number is 34. Furthermore, the African population will probably double over the next three or four decades while the European population is hardly growing.

A growing disparity
It is relevant to point out the disparity between our emotional engagement in human-wildlife conflicts and trophy hunting because these two subjects are inherently entwined. Most fatal human-wildlife conflicts in Africa involve large and dangerous species like elephants, lions, leopards, hippos, and crocodiles. Trophy hunting is one of the main tools for managing the very same species. In large parts of southern Africa, hunting tourism is the primary (if not the only) source of income tied to wildlife. The influx of money is the main reason rural communities tolerate living in coexistence with these animals. Therefore, hunting protects these species and their habitat.

Rosie Cooney, zoologist, and chair for the International Union for Conservation of Nature’s (IUCN) Sustainable Use and Livelihoods Specialist Group, is very straightforward about it.

“There are only two places on the earth where wildlife at a large scale has actually increased in the 20th century, and those are North America and southern Africa. Both of those models of conservation were built around hunting,” she said.

According to the team of scientists behind a 2017 report that applied numbers to the conservation efforts of nations, Botswana, Namibia, and Tanzania are doing more to conserve their large wildlife than any other countries. African countries are lightyears ahead of most European nations, including Great Britain. The numbers do not lie. Countries in Africa that use hunting tourism as a part of their nature conservation toolbox are far more successful than countries that ban hunting. Kenya lost 70-80 percent of its large wild animals since the hunting ban in 1977, while South Africa increased its wildlife population 40-fold (to around 20 million large wild animals) because of the financial incentives from hunting tourism.

Compelled by the West
Nevertheless, there is a strong call for punishment of African nations using trophy hunting in their nature conservation approach, simply because many voters do not like the idea of trophy hunting. Anti-hunters would most of all like to ban trophy hunting entirely. Still, in the light of the fact that international law prevents our Politicians from dictating the legislation of other countries, most popularity-seeking politicians are opting for a hunting trophy import ban. In plain English, this is a trade embargo. Punishment for acting against Western public opinion. The anti-hunters offer no alternative solutions and indeed no form of financial compensation. African nations, African scientists, and the rural communities of Africa who pay the ultimate price for coexistence with dangerous wildlife are all completely ignored.

Trade embargos designed to coerce third world countries to adapt their legislation to western emotions is indistinguishable from simply dictating their legislation. Many of these countries are so poor that they have no other options than to cave in and do as we want them to if the international pressure becomes too high. In Africa, a western trophy import ban will have the same effect as a local trophy hunting ban. Strong forces in the West still feel that it is justifiable to dictate what Africa must do. This is neo-colonialism in the name of animal rights and there is a surprisingly strong public support of this policy.

Strong feelings
In September, Survation ran a survey ordered by the IUCN on the subject. There were 2,164 UK respondents. Among other questions, the survey asked the respondents to answer this:

When confronted by this dilemma, 47 percent of the respondents answered that animal rights are most important, 26 percent answered that neither should be prioritised, and only 19 percent thought that human rights should be considered more important than animal rights. The rest didn’t know what to answer.

Apparently, more than twice as many people in the UK think that animal rights are more important than human rights than the other way around. At least, this seems to be the situation in the ongoing debate about trophy hunting in third world countries.

Different attitudes on your doorstep
Closer to home, the attitude seems to be different. One example of this is the massive amount of media coverage following a case of a fox, a rat, a seagull, or any other animal attacking human beings in our own countries. Western media and politicians are also very reluctant to interfere with wildlife management in western countries. This reluctance is strange because hunting in Europe is essentially the same as in Africa, although we hunt more on our continent. Did you know that German hunters kill more than a million roe deer every year, and in France, the authorities want the hunters to kill around 900,000 wild boar this season?

What is the reason for this blatant discrimination? Why do westerners trust that the authorities of France, and the experts they rely on, are better at sustainably managing their country’s wildlife than authorities and experts in Botswana? Why does it create a massive public outcry when an urbanised fox in London bites a child once every few years when we accept that wild animals in Africa kill thousands of people every year?

It has been demonstrated in the streets that ‘Black Lives Matter’ in our part of the world, but apparently they do not matter quite as much as the lives of old lions – especially not if the black lives in question are in rural communities in the third world. It is becoming increasingly hard to dismiss that the heartfelt love that a lot of well-meaning people in the West feel for their favorite iconic wild animals has a dark neo-colonial and racist flipside.