This year’s Crazy Christmas Cabaret was two years in the making and the evidence was in the script!

‘Tell Me About It’ didn’t just have a surprise ending that perfectly paid tribute to it being the 40th anniversary show, but a whole load of twists more akin to a M Night Shyamalan film, but without the dead people everywhere.

Stinging satire
Whereas most CCC renditions are historically set and well researched, the setting for this romp was the criminal underbelly of 1980s Miami – an era the writers clearly had a whale of time in (the decade, not the decadence) and it really showed!

The jokes about the period setting were better than average (the obligatory Trump appearance, but as a younger man, for example), and for the majority of the audience, this was a long wallow in welcome nostalgia, remembering a corona-free, less technology-driven time when we were, dare we say it, a little bit happier.

The jokes about early mobile phones being heavier than a wise guy with concrete shoes went up like a helium balloon.

And just as welcome was the biting satire, with both Mette Frederiksen (lightly but adroitly) and Danske Bank (heavily with a sledgehammer) on the receiving end.

Viva Vivienne
Equally impressive were the performances. As happy as Vivienne McKee obviously was to see everybody after a two-year break, she quickly fell into character in what must be her bravest performance for years.

Whether she was laughing at her age, or laughing it off with abundant sexiness, her turn as Lola (there’s a song right there) the nightclub hostess was disarming, but it was as tried crowd favourite Dr Bent van Helsingør that she gave a performance for the ages.

We’re not sure the doctor has ever been sodomised before, but it gave him nuance beyond even the wildest expectations. And the satire was relentless.

McKee’s age was referenced in the show’s best scene: a recollection of a character’s first love, which effortlessly went from wry voiceover to ‘Lady and the Tramp’ to silent movie mode, interspersed with the best lines of the night. 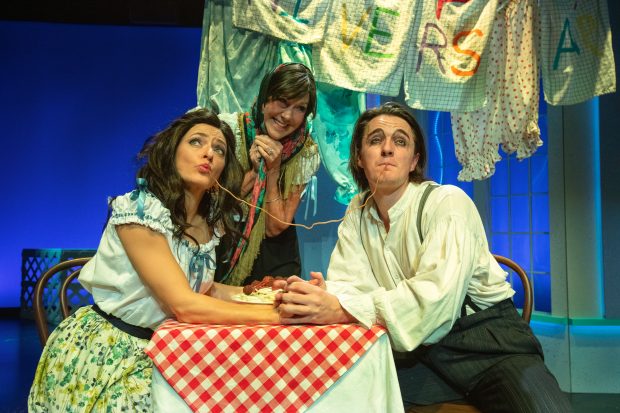 Loveable lads
Over the last two to three years, McKee has increasingly grown dependent on the energy of two young actors to drive the action – Jefferson Bond and Kevin Kiernan-Molloy – and again both were in riotous form.

This time around, Bond chiefly played the leading man, and his was a more sedate performance than normal, inhabiting mostly Anglo accents with assurance. For Kiernan-Molloy, this was a chance to showcase all manner of vernacular, sexuality and psychosis, and he was brilliant at whatever he tried.

Arguably his funniest moment came during the 1980s diva tribute, stretching out in his leotard to Katrine Falkenberg belting out Olivia Newton John’s ‘Physical’.

Without a doubt, the best musical number of the night, and Kiernan-Molloy didn’t say a thing. But if you have the gift to make an audience laugh … 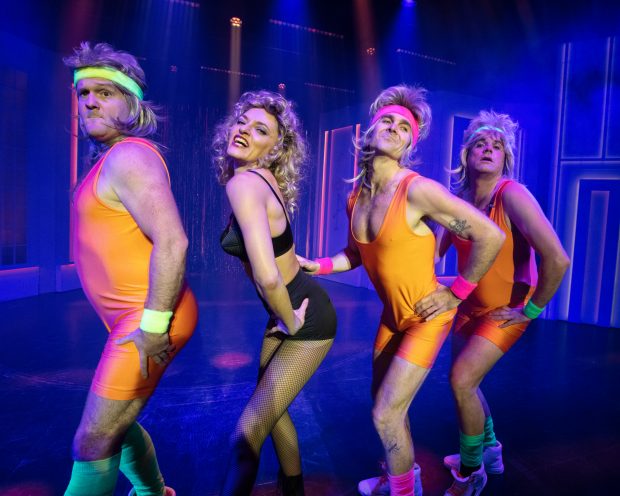 Spaghetti weirdness
Not all the musical numbers were knockouts, though. ‘Eat it’ wasn’t funny when Weird Al Yankovic sang it either, and the spaghetti elements were plain weird.

The opening song and dance routine was also poor: a clumsy way of introducing every actor from the very start that only succeeded in dwarfing the stage.

Falkenberg has a lovely singing voice though, and the band were really on the money this year, adding to the hilarity with their sound-effects – most notably the post-coital squelch in relation to The Dame. It sounded uncomfortably life-like.

Long live the CCC
All in all, this was the best Crazy Christmas Cabaret for quite a while. For once it really delivered what it promised on the tin about satire.

Its star was in her element, all her faithful troops – Falkenberg (tireless), David Bateson (makes it look so easy), Andrew Jeffers (great timing), Bennet Thorpe (joyous as Sonny Crockett) – were on song, and her young charges were bursting with energy.

With such vivacity, it’s hard to imagine this show won’t go on to outlive us all. 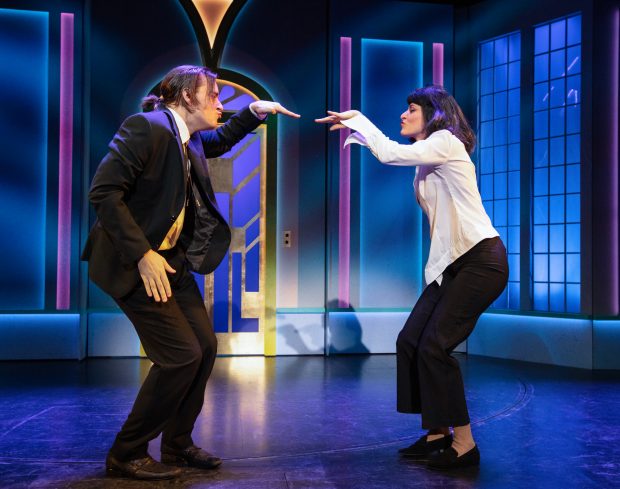 ongoing, ends Jan 15, Tue-Sat 19:30, Sat 15:00, Sun 17:00; Glassalen at Tivoli, Cph V; 185-410kr, londontoast.dk
The Crazy Christmas Cabaret 2021-22 instalment ‘Tell me About it’ will whisk you away to Miami for an evening of music, laughter, dancing, biting satire and cross-dressing. There’s plenty of Danglish humour to amuse both Brits and Danes. The show, and creator Vivienne McKee, are both national institutions.