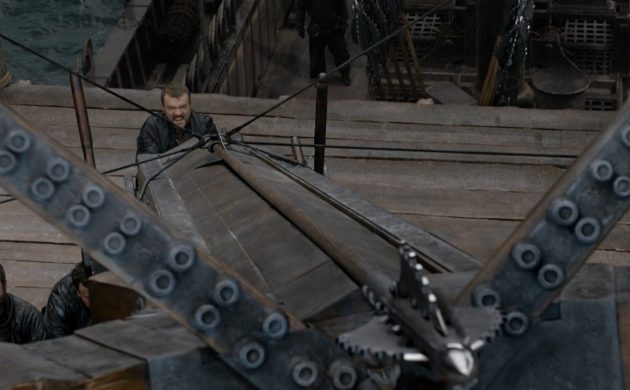 There’s a consensus among some ‘Game of Thrones’ fans that the turning point in the TV dramatisation – from classic to crass – came when Euron Greyjoy asked one-handed Jamie Lannister whether his sister likes a “finger in the bum” during sex.

The question today is whether historians might conclude that the turning point for the current Socialdemokratiet government came when actor Pilou Asbæk – the very same who played Greyjoy – announced his intention to join the party to reform its refugee policy from within.

You’ve got to hand it to him: that’s a huge challenge, although his Iron Fleet did manage to take Rhaegal the fire-eating dragon down with a paltry arrow.

And don’t forget that his big break in acting came via playing the political spin-doctor Kasper Juul in ‘Borgen’, so he’s had plenty of practice at meaningless rhetoric.

Reforming the government from within … if Twitter is within
Asbæk, 39, has today confirmed via Twitter that he has “joined Socialdemokratiet to speak out against their refugee policy from within”, adding: “If you can’t beat them, join them” – the first of several clichés, it transpired.

“Wish me luck. I will probably be a total failure, but nothing ventured, nothing gained,” he added.

Instead of the coastline of Westeros, the battleground will be @Spolitik, the government party’s Twitter page.

Lamenting a backward anti-human refugee policy
In the Berlingske article, which was entitled ‘The nation that went backwards’, he accused the government of being divisive.

“My criticism is about a negative them and us rhetoric that creates opposition between Danish society and our Muslim citizens. It is about an anti-human refugee policy,” he wrote.

“And it is about how large parts of the political landscape, led by the government, not only refuse to take responsibility for creating a division in society, but again and again incite xenophobic and hateful rhetoric.”

Four ways to win the game of thrones
So here’s four other ways Asbæk could win the battle from within, besides depending on his powers of persuasion on Twitter.

1/ Turn up at the next Socialdemokratiet AGM (in September probably) and exercise his right as a celebrity to be lauded by flag-waving members and politicians deeply proud the international star is a Dane. He’ll get a standing ovation for just being him.

2/ Turn up unannounced at the PM’s office – he knows the way thanks to ‘Borgen’ – and get her to cancel her 10:30 with the president of the Maldives. After all, he’s the supreme commander of the Iron Islands and has a bigger fleet.

3/ Appeal to deranged ‘Game of Thrones’ fans that Queen Cersei has been reincarnated in the shape and form of PM Mette Frederiksen and must be deposed. Both have an affinity for mink, both act as if a group of people doesn’t exist, and both have exactly one Danish brother to call on to give them a hand.

4/ Offer to fulfill part of Denmark’s refugee quota himself. He’s not short of a bob or two, so come with a few solutions instead of grievances!