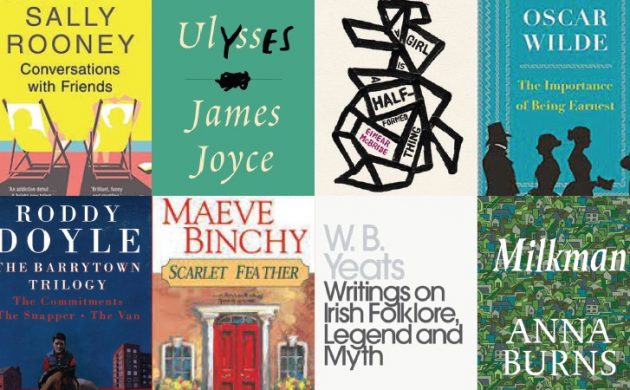 You don’t have to drink ten pints in your local Irish bar to celebrate St Patrick’s Day.

You could just stay in and read a book and still awaken a swell of national pride by acquainting yourself with this pick of ten must-know literary figures from the Emerald Isle.

Doing both on the same evening might be foolhardy, although a pint or three of the Black Stuff has helped readers navigate the likes of ‘Ulysses’ and ‘Finnegan’s Wake’, while champagne is the perfect accompaniment to ‘The Importance of Being Earnest’.

Anglo-Irish contingent
It’s arguable, of course, whether the latter is a worthy inclusion in this best of Irish literature, as Wilde was very much an English gentleman raised in an Ireland under British rule.

For the same reason, other Anglo-Irish writers such as Bernhard Shaw, Jonathan Swift and CS Lewis have failed to make our top ten, as they are not renowned for their contribution to the Irish voice.

So, ten pints or ten Irish writers? The choice is yours. No doubt, the main characters in ‘Normal People’ would opt for both.

Oscar Wilde
Oscar Fingal O’Flahertie Wills Wilde – to use his full and exemplarily Irish name – rose to prominence in the 1880s and 90s on the wings of his brilliant wit and style. But the beloved poet, playwright and novelist behind such icons of the written word as ‘The Picture of Dorian Grey’ and ‘The Importance of Being Earnest’ has only soared to greater heights in the century since his death. He is the poster boy of the 19th century Aestheticism movement, which holds the pursuit of beauty and good taste to be the main aim of art. Aesthetes like Wilde shunned didacticism and instead elevated the vapid. If he was alive today, he would probably be an Instagram influencer. As it happens, his great grandson (who is a dead-ringer, by the way) is a computer programmer living in London.

Samuel Beckett
Samuel Beckett’s Cold-War era plays are half bone-chilling, half wildly obtuse musings on the global trauma of the nuclear age and the futility of human existence. But don’t all rush to the ticket office at once. If you can stomach it, seeing a Beckett play is a valuable experience. Standouts of his oeuvre include Waiting for Godot (1952) and Happy Days (1961). He won the Nobel Prize for Literature in 1969 but – tempting as it is to say that his plays are fitting mirrors of our uncertain times – Beckett’s absurdist nihilism will never go out of style.

James Joyce
The novelist, poet and critic James Joyce is regarded as one of the most influential literary figures of the 20th century. His modernist fever-dream masterpiece ‘Ulysses’ (1920) might be his best-known work, but ‘Dubliners’ (1914), ‘Finnegans Wake’ (1939) and ‘A Portrait of the Artist as a Young Man’ (1916) are all seminal in their own rights. Head to Dublin and you’ll find an impressive number of commemorative plaques in pubs that he frequented. Davy Byrnes on 21 Duke Street, a favourite, even gets a mention in ‘Ulysses’ when Leopold Bloom drops in for a gorgonzola sandwich and a glass of burgundy.

William Butler Yeats
William Butler Yeats is undeniably one of the greatest poets of the past century. He belonged to the Protestant Anglo-Irish minority in Ireland – most of whom considered themselves English – yet Yeats staunchly defended his Irish nationality, featuring Irish folklore and heroes in many of his works. Two of his major personal influences were famous patriot John O’Leary – returning to Ireland after serving 20 years in prison for revolutionary nationalistic activities, he encouraged Yeats to honour his cultural roots in his writing – and English heiress Maude Gonne, an ardent Irish nationalist with whom Yeats developed an obsessive infatuation.

Seamus Heaney
Seamus Heaney’s poetry has been disseminated into the collective consciousness via being studied in English classes the world over – which may have taken the shine off for many but doesn’t diminish its brilliance. He was awarded the Nobel Prize in 1995 for his “works of lyrical beauty and ethical depth, which exalt everyday miracles and the living past”. Particularly well-known is ‘Death of a Naturalist’ – his first major published volume. As a Catholic in Protestant Northern Ireland, Heaney described himself as someone who “emerged from a hidden, buried life and entered the realm of education”. His poems largely revolve around Northern Ireland’s civil strife, local culture and language overrun by English rule.

Roddy Doyle
Dublin-born Roddy Doyle’s raw accounts of the working class have earned him a spot as one of Ireland’s fiction favourites. Several of his books have become successful film adaptations: ‘The Commitments’ (1987), ‘The Snapper’ (1990) and ‘The Van’ (1991), which comprise ‘The Barrytown Trilogy’. He is also a prolific dramatist, having composed four plays and two screenplays. His work is dialogue-heavy, with little accompanying description. It’s largely set in working-class Dublin and unpicks domestic and personal concerns as well as wider Irish history.

Maeve Binchy
Over the course of her lifetime, author and journalist Maeve Binchy blew the roof off international sales of Irish literature, selling over 40 million book copies in 37 languages. Her novels have been plugged by Oprah Winfrey, turned into films and won her lifetime achievement awards at both the British Book Awards and Irish Pen/AT Cross Literary Awards. Binchy was born in Dalkey, County Dublin, and returned in later life to settle in an ‘unpretentious Georgian cottage’. Nevertheless, her depictions of betrayal, child-parent relationships, rural and urban life, and cultural and religious transformations in Ireland resonated with readers far beyond Ireland’s borders.

Sally Rooney
Sally Rooney is the buzzword contemporary Irish author of the last five years. Her first two novels, ‘Conversations with Friends’ (2017) and ‘Normal People’ (2018), became word-of-mouth success-stories straight off the bat. ‘Normal People’ leapt to the top of the US bestseller list in its first four months of release, selling almost 64,000 copies. It was promptly adapted into an Emmy-nominated TV series in the UK, which spawned a viral trend – and even a dedicated Instagram page (@connellschain) – for the ‘Argos-chic’ necklace worn by one of the central characters.

Anna Burns
Northern Irish writer Anna Burns is another modern literary heavyweight. Her novel ’Milkman’ scooped three major awards in three years: the 2018 Man Booker Prize, 2019 Orwell Prize for political fiction, and 2020 International Dublin Literary Award. In fact, she is the first Irish author to win the Booker. ‘Milkman’ explores the ordeals and complexities of growing up during the Troubles in 1970s Belfast. Despite the setting, the book taps into a universal narrative. “I would like to think it could be seen as any sort of totalitarian, closed society existing in similarly oppressive conditions,” Burns explained to the Guardian. “I see it as a fiction about an entire society living under extreme pressure, with long-term violence seen as the norm.”

Eimear McBride
McBride wrote her debut novel – ‘A Girl Is a Half-formed Thing’, a stream of consciousness narrative set in 80s Ireland – in six months, but it took nine years to get it published. Once out in the wild, the novel took off and was hailed by critics as “blazingly original” and “unflinching”. McBride explores themes including the ubiquity of porn, the performative nature of feminism, sex and the body, shame, disgust and gender stereotypes. Much of McBride’s success is grounded in the way she translates her own personal experience into prose. “As an Irish Catholic, I belong to a long tradition of shame,” quipped McBride, explaining the roots of her work.